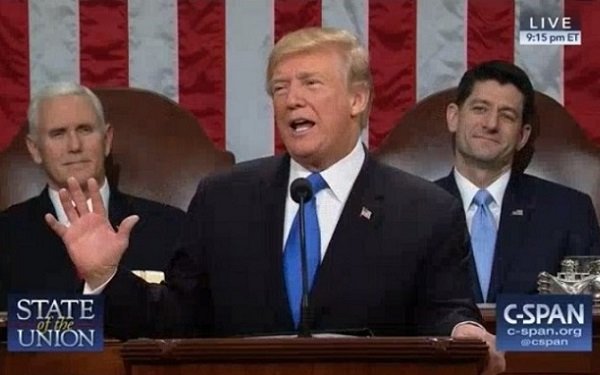 If last year’s Trump State of the Union speech was characterized by facial expressions of ice-cold acrimony on the part of the Democratic opposition in attendance in the U.S. Capitol, then the reactions to this year's speech figure to be on par with the record Arctic cold snap now sweeping the nation.

It might not have seemed possible, but the divisions in the body politic that have been an integral part of the Trump era -- from his campaign for president through the first two years of his administration -- seem even more hopeless today, particularly in the aftermath of the recent government shutdown (which may be shut down again soon, since the truce that ended it was supposed to last all of three weeks).

Thus, this year's State of the Union speech, scheduled for prime time starting at 9 p.m. Eastern on the usual array of networks next Tuesday (February 5), will likely be a huge draw, since it contains the best single characteristic that a reality TV show can have to position it for ratings success: conflict.

The president's supporters will tune in to see how he will stick it to the opposition in his speech. He will no doubt come up with some way to put a positive spin on his own role in the long shutdown.
Predictably, he will likely blame the Democratic-controlled House of Representatives for refusing to give him the money he demanded to build a Mexico border wall.

His fans will delight in the stone-faced reactions of the opposition, starting with House Speaker Nancy Pelosi, who will be seen throughout almost the entire speech because of her seat behind the president (alongside Vice President Mike Pence).

Last year, the House Speaker was the Republican Paul Ryan (seen in the photo above from last year's speech), whose demeanor was much more jovial than Pelosi's is likely to be this year.

But millions who oppose President Trump will also be tuning in. They will be eager to parse what he says -- labeling various statements as nutty or unglued -- and doing some high-fiving of their own when Pelosi is seen rolling her eyes, or TV cameras catch Elizabeth Warren shaking her head or Bernie Sanders dozing (as a form of protest, of course).

Yes, this year's State of the Union speech will have an anything-can-happen quality that we do not usually associate with this annual ritual. And we have Donald Trump to thank, or blame, for it.

Meanwhile, Trump has said yes to the quasi-traditional Super Bowl Sunday interview with the network airing the big game -- CBS. This tradition dates back only to 2004, but until Trump declined an invitation to be interviewed on NBC last year, presidents Bush and Obama agreed every year to these interviews. Trump agreed in 2017 when the interview was with Fox.

Trump's issue last year was said to be his ongoing disgust with NBC News, stemming primarily from MSNBC's relentless attacks on him. For him, it was another tantrum against “fake news,” a stance that never fails to delight his base.

This interview also has an anything-can-happen air around it, although it will not have nearly the impact or the potential for drama of the prime-time State of the Union spectacle on Tuesday night.

Whatever happens, the two events add up to a one-two presidential punch.