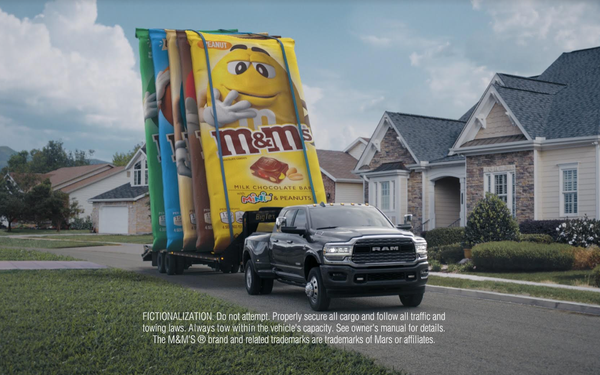 Perhaps the lack of scoring in the game itself caused viewers to perk up even more during the commercial breaks.

Automakers that aired commercials during the Super Bowl game saw an average 384% lift in traffic to vehicle pages on Cars.com.

The one huge and notable exception was Kia Motors America. That automaker actually saw a 14% decline in visits to its pages Cars.com as a result of the airing of its somber spot, which one pundit writes was an insult to Georgians. Another called it “a funeral dirge. They went for empowering and landed on depressing.”

The morose tone of the spot, from David&Goliath, wasn’t helped by its airing late in the game.

“Ad placement made all the difference in this year’s game,” Brooke Skinner Ricketts, chief marketing officer of Cars.com, tells MediaPost. “The first auto ads that ran received the highest engagement and drove the most traffic on Cars.com. As the mostly uneventful game dragged on, traffic spikes were less dramatic.”

Edmunds analysts also tracked traffic to brand and model pages on both its desktop and mobile sites during the game to see which automotive ads were most successful in driving immediate shopper interest.

Audi’s “Cashew” ad, promoting the e-tron lineup, was the most successful ad of the night, boosting traffic to the e-tron GT by 13,578%, and helping Audi enjoy the most traffic growth of any advertised brand, up 116%.

Toyota’s “Wizard” ad was also a big success, with traffic to Supra pages also up more than 13,000%.

Toyota garnered the highest percentage of online activity following its ad airings, according to Entertainment Data Oracle, a measurement and analytics company that applies data science and behavioral metrics to help measure brand impact. Out of every car brand, Toyota had the highest level of engagement by a decent margin (45%), with Kia coming in second (28%). Rounding out the list was Hyundai (11%), Audi (10%), and Mercedes Benz (6%).

In an unusual move, Fiat Chrysler Automobiles made a last-minute announcement on Friday that it would sit out this game, instead showing its recent spots for Ram Truck and Jeep on digital only. However in a creative move, the Ram Truck brand teamed up with six big game advertisers during the broadcast — M&M’S, Pringles, Amazon, Avocados From Mexico, Devour and Persil ProClean — to launch “#RamWillTowThat,” a live and interactive social media collaboration taking place on the Ram Brand’s Twitter page.

"Our site analytics prove that millions of fans use a second screen to visit Cars.com during major live televised events like the Big Game to research, shop and connect with dealers in real time,” Skinner Ricketts says.

Of the automakers that invested in airtime during the game, Hyundai Motor America ranked No. 1 in traffic to Cars.com. Within eight minutes of its commercial airing, visits to Hyundai brand pages on Cars.com saw a whopping 1,831% increase in comparison to the same time period prior to the airing of its spot. The humorous commercial from Innocean featured actor Jason Bateman and focused on the brand’s Shopper Assurance program. It also was the top auto spot, coming in fourth overall in the longstanding  USA Today Ad Meter.

I took an informal survey of my social media followers, and the reaction to the Hyundai spot was overwhelmingly positive, sans one non-animal eater, who found the vegan joke “tiresome.” There were some others who failed to see the humor, including Anna Keeve, founder of the pop-up vegan dinner party company, PlantBasedPopUp, who sent out a press release following the game calling it an “insensitive, outdated reference.” She noted that New England Patriots quarterback Tom Brady eats a nearly completely plant-based diet and is the face of vegan delivery meal service Purple Carrot.

Regardless of vegans being offended, the share of new car search for Hyundai on CarGurus.com is up 0.6 percentage points from 3.1% to 3.7%, which is so far their high for the year. This bucks a Super Bowl advertising trend, where usually we see a search increase at the model level, but not the brand.

Meanwhile, Mercedes-Benz saw a 720% lift on Cars.com, while Audi experienced a 691% jump.  After Toyota’s RAV4 Hybrid commercial featuring female football player Toni Harris, the automaker saw a 225% lift. The Supra “Pinball Wizard” spot prompted a 138% jump. Incidentally, that is not the first time that famous song appeared in an ad. It was used in 1986 by a major United Kingdom bank, NatWest.

Cars.com site traffic data was collected in real time, and performance of TV commercials were measured by comparing the eight minutes immediately before and after each commercial aired. Mobile visits continued to grow throughout the game, with 74.2% of visits coming from a mobile device during the game, up from 69.2% before the game started.

After automakers’ ads ran, Dealer.com also saw a dramatic lift in website traffic, with total visits increasing by 689%, approximately a 338% increase from last year. On KBB.com, Hyundai and Kia were the overall brand winners, followed by the two luxury advertisers (Audi and Mercedes-Benz), both of which featured new models along with Hyundai and Kia.

“The car ads were more entertaining than the actual game AND half time show put together,” said Brian Moody, executive editor of Autotrader. “The Hyundai spot with Jason Bateman was both entertaining and informative."

Maybe a somewhat boring game — the lowest scoring in Super Bowl history — wasn't so bad for advertisers after all. Except for Kia, which probably should have taken a page from FCA and sat on the bench this year.