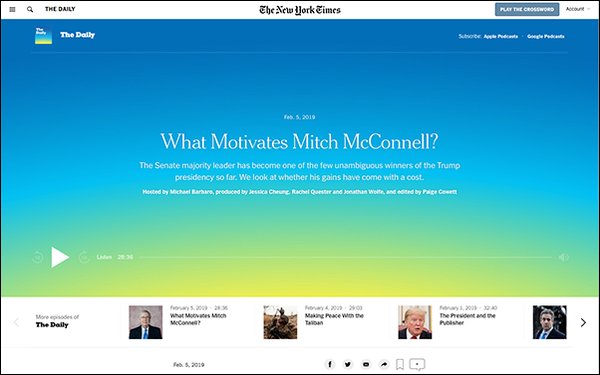 The New York Times wants to make its podcasts more accessible to its audience. To that end, it has begun releasing audio transcripts for each episode of its popular podcast “The Daily.”

In a post introducing the new service, Dalit Shalom stated: “What makes podcasts so special, also renders them inconvenient: they can only be heard.”

Shalom continued: “It’s important to us that all of our readers can engage with our report, whether they choose to listen, share or read. Audio transcripts are a big step forward in our commitment to make Times content accessible to all users.”

The transcripts provide a word-for-word text document of each “Daily” audio file, with every line of the transcript time-stamped to its corresponding place in the audio file. The result is a script-like layout that allows users to search for specific pieces of information from the show or copy a quote to share across social media platforms.

Each transcript has its own dedicated URL to aid in sharing. The URL is accessible from the podcast page and the transcripts also now appear in search results, adding an extra layer of visibility to "Daily" content.

The next shows to receive the transcription treatment including “The Argument” and the next season of “Still Processing.” Future transcriptions will include a functionality that links the lines of the transcription to corresponding segments of audio. The project also hopes to find avenues for readers to share podcast clips across social media.

The Times also announced it has reached a new milestone with its free subscription service for students.

Because of financial contributions from more than 30,000 readers, free access is now available to more than 3 million U.S. students.

The subscriptions provide access to The Times to 4,000 schools in both large districts in places like Chicago and Miami-Dade and small districts in rural areas across all 50 states.

According to Axios, which first reported the new numbers, the program is a way for the news service to cultivate its next generation of readers.

The program launched in 2017, with donations coming from almost 75 countries. While one anonymous donor gave $1 million to the program the year it launched, most donations average $50, reports Axios.

The Times plans to expand the program internationally going forward.