Super Bowl Spots, Take 2: Does This Look Screwy To You? 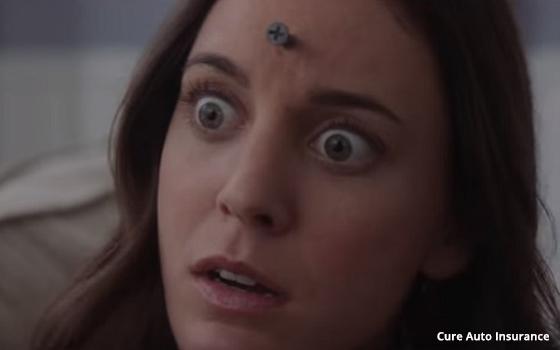 In the final analysis, the best commercials seen during the Super Bowl were the ones that came across as the most conventional.

By contrast, various sponsors’ attempts to come across as comedic or offbeat fell flat, or were vaguely (or not so vaguely) off-putting.

One example of this was the spot for Cure Auto Insurance featuring a man and a woman trying to have a heart-to-heart talk. This became difficult because the man was distracted by a screw that somehow became impaled in the center of the woman's forehead (screen grab above).

The spot's climactic moment came when the man became so frustrated that he lost his temper. Suddenly, he lunged at the woman, roughly grabbed her with two hands on both sides of her head, yanked the screw out of her forehead with his teeth and crudely spit it out.

So, basically, this was a TV commercial that used a vignette of male rage and aggression to sell auto insurance. And not only that, yanking a screw out of someone's forehead in this way would undoubtedly be painful, and also bloody.

While there was no blood in the scene, one could not help but wince at the violence of the whole thing. It was a terrible commercial.

Another off-putting spot was the one for the prepaid phone service known as Mint Mobile. For reasons that remain obscure, this spot featured a mom serving her daughter a nice tall glass of “chunky-style” milk.

This milk and its grotesque chunks were then shown in extreme closeup. While watching this commercial, all I could think about was the stomach-churning prospect of opening up a milk carton and finding that the milk had become badly soured.

This commercial's chunky-milk cinematography was so effective that I could practically smell it. It was gross. What this had to do with Mint Mobile, I know not.

Take the Pepsi Super Bowl spots featuring Steve Carell. I think they were trying to ignite a slogan craze of some sort along the lines of the old “Wassup?” Budweiser commercials. Thus, you had Carell and various guest-stars saying “OK” in various ways. News flash: As of Tuesday, this had not caught on.

For me, the most surprising ads, in their effectiveness, were the elaborate “dilly-dilly” ads for Bud Light. This series of Super Bowl spots hammered home the point that the brand's principal rivals -- Miller Lite and Coors Light -- use corn syrup in their brewing process, while Bud Light does not.

When you stop and think about it, it is an interesting phenomenon of advertising that this series of spots was able to convince us that using corn syrup in the process of brewing beer is wrong.

For all any of us non-brewers know, corn syrup in beer-brewing might be just fine. It might even be a good thing to do. And yet, the spots made you think: Coors and Miller are putting corn syrup in my beer? Eww, gross!

Many advertisers during the big game played it straight. These included WeatherTech, Norwegian Cruise Lines, Yellowtail Wines, Skullshaver.com, Wix.com and ADT (featuring HGTV's Property Brothers). These were all great commercials.

The spot for the Mini-Cooper Countryman featuring singer Labrinth behind the wheel crooning “Don’t Fence Me In” (composed by Cole Porter in 1934) was possibly the classiest spot in the whole telecast. Airing soon after the game's atrocious half-time show, this spot and its song came as a welcome contrast to shirtless Adam Levine of Maroon 5 and the censored rapping of Travis Scott.

Speaking of songs, perhaps I am showing my age when I complain here about Bob Dylan's original “Blowin’ In the Wind” turning up in a Budweiser Clydesdale spot that was promoting Anheuser-Busch’s use of windmill-generated power to brew its beer. This song was once an anthem for a new generation. Now it's in a beer commercial. Sigh.