State Of The Union Speech Was All Upside For Trump 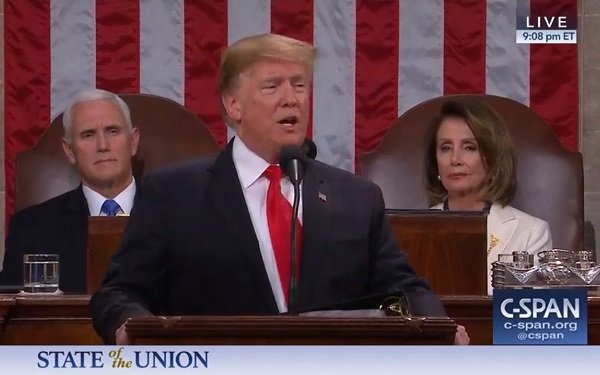 Once again, a televised State of the Union speech emerged as a win-win for the president who delivered it.

And just as predictably, his adversaries looked like killjoys, at least most of the time.

Having said this, among the surprises during President Trump's second State of the Union speech seen everywhere on TV Tuesday night were the instances where the opposition actually applauded him.

Most notably, this included the many Democratic congresswomen who all dressed in white as a display of solidarity. They were actually seen not only applauding and cheering, but doing this while standing. These ovations came when Trump mentioned female employment and the like.

Trump himself seemed surprised by these unexpectedly supportive interludes. At one point, he thanked the opposition in white and ad-libbed, “Don't sit yet, you're gonna like this!” -- referring to another point that he felt might earn another ovation.

Perhaps some of these Democrats had learned from past SOTU speeches -- such as last year's, for example -- that sitting there glumly is not necessarily the best way to be seen on television.

On the other hand, plenty of Democrats still chose various key moments to sit there frowning. For example, Bernie Sanders was seen frowning right after Trump said, “America was founded on liberty and independence, and not government coercion, domination and control. We are born free and we will stay free.”

Senator Sanders might love America just as much as Trump does, but when Sanders is seen on TV reacting passively to this kind of statement, it is easy to conclude that the President's imagery of a free America does not agree with him.

The same can be said of the first-year congresswoman from Queens, Alexandria Ocasio-Cortez, whose stone-faced expression throughout most of the speech (or at least when she was caught on camera) was noted by many in the hours after the speech.

Sure, many people don't buy into the rosy picture of America the Beautiful that all presidents -- be they Republican or Democrat -- try and paint during these State of the Union speeches. At the same time, however, it wouldn't kill the opposition to at least look as if they're buying into it for this one evening each year.

The fact is, when it comes to making an impression on TV, facial expressions of resistance, anger and, some might say, hate are not constructive. Maybe the long faces play well to various sectors in the Democratic party base. But in the main, demonstrating at least a baseline affection for America, no matter who is President, should be the goal of the opposition in these rare -- indeed, once-a-year -- opportunities to show some unity.

To his credit, one of the themes of Trump's speech was unity -- or at least an attempt at unity -- when he spoke of his administration and Congress coming together to make decisions and craft legislation to benefit all Americans, rather than the members of a single party.

Yes, doing this in reality does seem like a tall order in this day and age, but faking it for one night is not a bad thing to do either.

As in past years, the portions in which the President introduced various guests seated around the First Lady in the balcony were particularly moving. They ranged from very aged veterans of D-Day to people whose relatives had unfortunately been killed in horrible crimes.

Buzz Aldrin, 89, was there too, to take a bow for the 1969 moon landing, which will celebrate its 50th anniversary this summer. Watching all of the elderly heroes seated in the gallery, it was logical to wonder: Gee, so many of our heroes are getting up there in age. Are we still producing heroes like them?

The speech ran to just under one hour and 23 minutes -- which was pretty long, even for this annual speech that usually lasts in the neighborhood of an hour.

Who knows? Maybe the length was intentional. Maybe the Trump SOTU team felt that the longer and later it went, the greater chance more people would turn in for the night and skip the Democratic response.

government, politics, tv
7 comments about "State Of The Union Speech Was All Upside For Trump".
Check to receive email when comments are posted.
Read more comments >
Next story loading