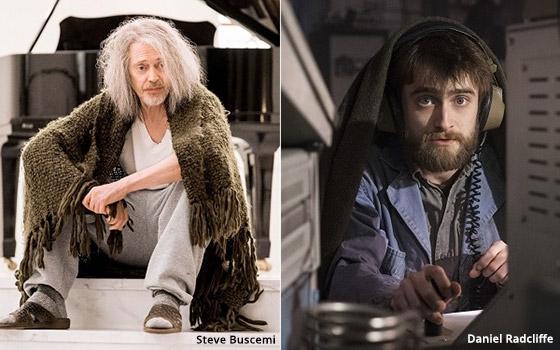 It is a rare phenomenon indeed for a new TV show to start out so promisingly, and then suddenly walk off a cliff into the abyss of TV tastelessness.

But that is what happens with this new TBS comedy series called “Miracle Workers,” premiering Tuesday night.

Episode One had me thinking we had turned a corner in made-for-cable comedies with this show that actually seemed to be about something.

When a new TV series suddenly veers off in this direction, it can make you wonder -- how did this happen?

By the looks of this show, considerable investments were made in such things as talent (cast) and set design. The show stars Steve Buscemi as God and Daniel Radcliffe as an angel and member of a vast coterie of God’s “employees” who basically run heaven. In this show, heaven is depicted as a vast industrial complex with infinite departments.

These departments are each assigned to manage various aspects of life on Earth -- from weather phenomena to answering prayers (even minor ones). “Heaven Inc.” -- as this complex is called -- is very imaginatively rendered.

So what happened? Did the producers run out of money when it came to hiring grown-up writers? The script for Episode Two reads like it was written by junior high schoolers who the producers recruited from down the street in exchange for candy.

With its two A-list stars (nevertheless supported by a cast of unknowns), “Miracle Workers” is being positioned as a “limited” (translation: “prestige”) series. It consists of just seven episodes. It is based on a book called “What in God's Name” by someone named Simon Rich, whose name appears on the show as creator. Lorne Michaels is executive producer.

The scenario is this: Buscemi plays God, who is mired in a depression. Like many of us mortals, he watches way too much TV news. The constant cacophony of disasters both natural and manmade have made him throw in the towel. The situation on Earth has become so unmanageable that even He cannot fix it. As a result, he no longer cares about Earth and the welfare of its inhabitants.

In addition, his depressed state makes him neglect the management of Heaven Inc., whose various departments drift without his guidance while his employee/angels lose interest in their work.

Instead of acting as heaven's CEO, God mopes around the house a lot. When he is not wallowing in the bad news he sees on TV, he concerns himself with questionable projects. This is where Bill Maher's genitalia comes in.

In Episode Two, God becomes annoyed when he sees Maher on TV complaining about religion. So God assigns one of his underlings to the task of somehow making Maher's penis explode.

And this is not some one-off joke either. It was actually one of two storylines in the second episode. Instead of this odious and decidedly immature idea appearing and then going away, it persisted -- at which point, I bailed. Sorry, I don't know what eventually happens to Bill Maher's penis.

The problem is that this show plays as something new until this idiotic penis plot gets dropped in the audience's lap. Up until that point, it was a sitcom about what would happen if God didn't care anymore. That was a great idea right up until about five minutes into Episode Two.

Radcliffe is great in his role as the only clerk in the answered prayers department, where he is so overwhelmed by the sheer amount of people's prayers that he can barely handle any of them. His performance, and Buscemi's, were so funny at the outset of this show that they actually made me laugh out loud.

Now the only thing to do is pray that the rest of the show's seven episodes steer clear of genitalia -- Bill Maher's or anyone else's.