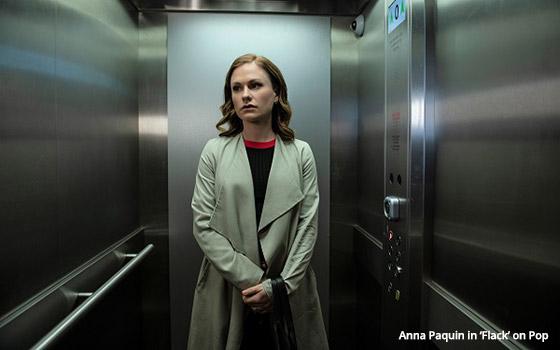 The new Pop drama series called “Flack” is less about the world of a celebrity publicist than it is the story of an addict who just happens to work in p.r.

Clearly, this woman's life has become -- or is on the verge of becoming -- unmanageable. Her name is Robyn, and she is played to perfection by Anna Paquin. “Flack” premieres this coming Thursday night on Pop.

That in of itself presents a challenge, since Pop is not exactly one of our better-known cable networks. Owned jointly by CBS and Lionsgate, Pop is known (if it is known at all) for a very small number of shows that anybody has ever heard of. Or maybe not.

“Flack” may or may not be Pop's first drama, but it does represent a new direction for this network, which has seemed to struggle with establishing an identity for itself.

This is a serious drama. For Pop, it is a far cry from the decidedly lighthearted fare this channel has been known for up until now (again, if Pop has been known at all).

Paquin's Robyn is a London-based p.r. rep for high-profile celebrities who find themselves in trouble. In the premiere episode and part of the second that the TV Blog previewed last week, she was not ever seen banging out any press releases or composing pitch emails.

Instead, she was seen getting her wayward clients out of potentially embarrassing jams, cleaning up their messes, planning cover-ups and concocting diversions to mislead the media.

“Flack” is a very adult show. The show is filled with sex scenes and f-words, which may or may not be bleeped for basic cable. But in this context, these are not gratuitous elements.

Robyn has plenty of problems of her own -- namely, addictions to sex and cocaine. And she is in a 12-step program to deal with them, but she is definitely not sober.

Unlike so many shows (or movies) of this type that purport to depict the kind of high-octane world in which Robyn works, “Flack” plays as if the writers and producers of this show know her world well. “Flack” feels real, which is a rare achievement for a TV drama.

“Flack” is described by Pop as a “limited series,” a phrase that I am beginning to interpret as meaning, “no one involved in it will commit to sticking around for a second season (if there is one).” Unfortunately, it might also mean: Don’t grow to like “Flack” too much, because it might be short-lived.