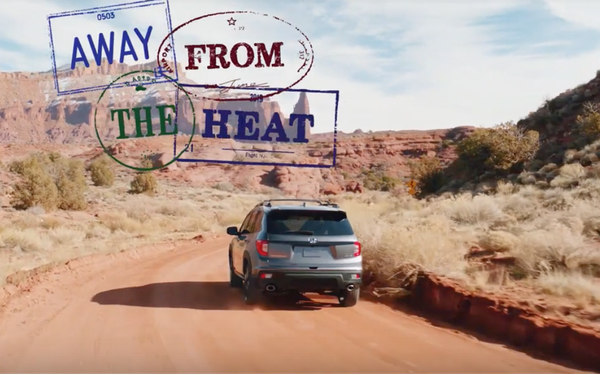 Honda is launching a campaign for its 2019 Passport SUV that aims to tap the adventure-seeker in all consumers.

Themed “Your Passport to Adventure,”  the effort is from AOR RPA. TV ads will run during the Oscars on Sunday.

The Passport’s social campaign will also tap adventure influencers to document their experiences, including some daring adventures with Passport.

Passport fits between CR-V and Pilot in Honda’s SUV lineup and just began arriving in dealerships. It is more powerful than CR-V and more off-road ready and personal than Pilot.

It shows how the vehicle is “comfortable and refined in everyday driving, but with an adventurous spirit that also lets you take off for the road less traveled,” she stated.

The creative plays off the vehicle’s name in incorporating passport-themed stamps.

In the first spot. a couple goes on an epic cross-country trip traveling in and out of breathtaking terrains like pages in a passport book.

The second spot highlights the features of the Passport Elite, including a wireless charger, ventilated seats and hands-free access power tailgate.

The third 30-second spot, “Sometimes,” is aimed at reaching Africa- American consumers and features aspirational vignettes that show how the Passport Elite trim can be a partner in the quest for adventure.

In addition to national TV, media will include a mix of sports programming, including high-profile sporting events -- during key NHL and NBA match-ups, as well as homepage takeovers on ESPN and CBS Sports.

The outdoor campaign uses location-specific headlines to encourage people to get out of their respective cities and into the wilderness, which is often closer than they think. The imagery is based on the visual style found in actual passports, and each headline is made out of passport-inspired stamps.

One billboard in Manhattan urges people to “Cross bridges beyond Brooklyn.” Another in Boston reminds people to “Leave the red brick roads behind.” Other out-of-home markets include Los Angeles, Denver, Chicago, Boston and Philadelphia.

Print will run in lifestyle publications including Outside Magazine, Travel and Leisure, National Geographic and Men’s Health.  Both the print and out-of-home campaign creative feature four different environments for Passport adventuring: desert, mountains, coastal and forest.

Passport will also be featured through Honda’s immersive music (Honda Stage) and gaming properties via a partnership with Twitch.