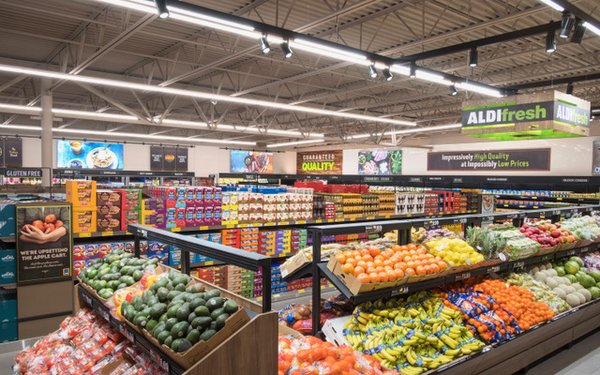 With the retail world buzzing about Amazon’s revelation that it will enter the brick-and-mortar grocery business, new research from Bain & Co. finds that Americans are more interested in deep discounts than in omnichannel offerings.

Both Aldi and Lidl, two German-owned chains that have been expanding rapidly in the U.S., are gaining share, attracting as many as 30% of shoppers. “Hard discounters are here to stay,” says Mikey Vu, a partner in Bain’s Chicago office and an author of the report. “People are very happy with this format.”

He says the news that Amazon is going into mainstream groceries isn’t all that surprising. “Grocers have been keeping an eye on Seattle for this for a long time. Grocery is one of the more 'online-proof’ sectors. It’s still fundamentally a local marketing experience. And while people are more open to picking up online orders, delivering groceries is just insanely expensive.”

Bain’s research, done in partnership with ROIRocket, included more than 17,000 consumers. The study finds that while Aldi and Lidl are relatively new to the U.S., they’ve attracted many cross-shoppers “and built up a surprising customer advocacy in a short time,” he tells Marketing Daily.

Aldi’s consumer advocacy scores climbed to 55% last year from 46% the prior year, placing it in the top three of all grocers. It outperformed in “best everyday low prices” and “best value for the money.” It gained more than 3% share of grocery spending in six of eight markets studied.

Lidl, newer to the U.S. and still mostly in the Southeast , gained 3% or more share in five of seven markets. “We had expected Lidl to do decently, but that it is so solidly in the middle of the pack is impressive. Usually, it takes longer for new banners to win people over,” says Vu.

Aldi and Lidl shoppers are motivated by saving, with Aldi (in roughly 35 states, but still expanding) offering items that are often between 15% to 20% cheaper than national brands. And only about 1% of Aldi shoppers buy groceries online, compared to 26% of the total sample.

Traditional grocery chains still have plenty of room to make customers happy, he says, particularly if they can concentrate on making shopping more convenient, including online offerings. “Can you offer pickup in an easier way? Create recipes? Online shopping lists?

Another edge traditional players might find is by investing in data and analytics. But only 5% of conventional chains have made this a priority. Aldi and other discounters are unlikely to invest in either data or analytics, Vu says. “It’s all about keeping costs low.”

And overall, he says, all grocers are paying close attention to private-label offerings, creating brands that have strong appeal. “Trader Joe’s, Aldi, even Kroger and Publix are all crafting brands much more like CPG companies,” he says. “They’re not just filling shelves with something cheaper.”