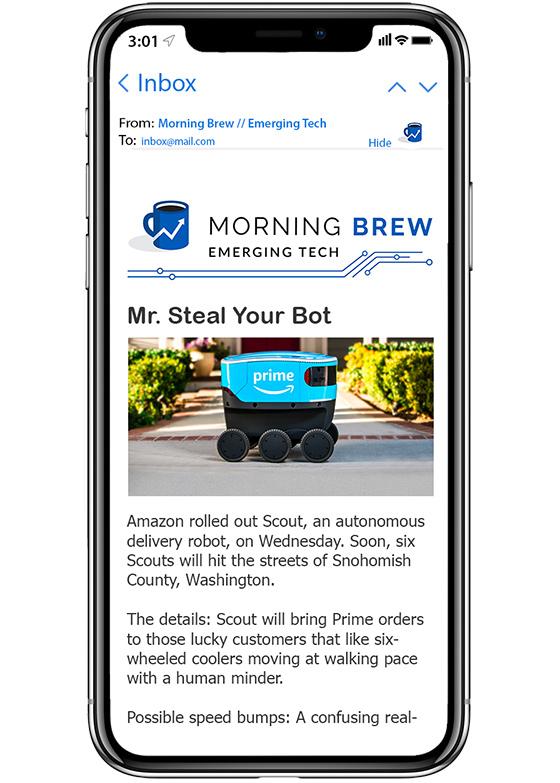 Morning Brew is known for delivering a curated batch of the most important business stories of the day in an easy-to-digest, quick and witty format. Cofounder and CEO Alex Lieberman created an early version of the newsletter called The Market Corner while a senior at University of Michigan. Later, he became a trader at Morgan Stanley upon graduation.

Expanding the brand, the emerging tech newsletter is blasted to subscribers every Tuesday and Thursday and explores topics like AI and machine learning, 3D printing, drones and any new technology that’s disrupting tech right now.

Morning Brew has been testing the new product within a beta group of around 380 users, reporting engagement the same or better than with its core newsletter.

Like Morning Brew’s core newsletter, the emerging tech edition will monetize itself through in-house created native advertising. Though Rief and Lieberman aren’t yet commenting on sponsors, they eventually hope the emerging tech newsletter will be sponsored by some of the same brands that cover the core product, like Fidelity and Fundrise, and new brands looking to tap into a tech-obsessed audience.

According to Lieberman, Morning Brew employs a twofold approach to its ads, which appear alongside editorial as 120-word blurbs  with the advertiser’s logo. The first is being extremely judicious about how advertising partners are chosen.

“We have a pretty simple litmus test: If either of us were to go home after work and spend time with our roommates talking about a product that we’re using, we would have to feel that same level of comfort with any type of advertiser appearing in Morning Brew,” Lieberman told Publishers Daily. “If we don’t, that means we should probably not feel comfortable with that brand going into the core newsletter.”

The second involves how content is delivered. To appeal to readers, the Morning Brew team, which now counts 11 employees, keeps the writing for ad set in a very similar format and tone to the rest of the newsletter.

The team is using what it learned from building Morning Brew to bolster the launch of its emerging tech newsletter and map its marketing plan going forward.

“The reason we’ve found some level of success with our content is that, if there’s one thing we’re good at, it’s putting ourselves in our readers' shoes,” said Lieberman. “We are our readers.”

Rief elaborated on how the newsletter will appeal to both readers and advertisers.

“The hope is that these are smaller, more tailored lists [of subscribers] which will be attractive for both readers who really want [that newsletter’s] specific content, as well as advertisers that may not want to get in front of 1.2 million business professionals, but want to get in front of ‘X’-thousand or ‘X’-hundred thousand business professionals interested in or working in a specific industry,” said Rief.

“It’s a very compelling value proposition for big or small tech companies on the cutting edge that want to get their messaging to people.”

The newsletter launches in conjunction with SXSW, where Lieberman will appear on a media panel next week, alongside The Points Guy Brian Kelly, Instagram’s Girl With No Job Claudia Oshry and Group Nine Media’s President Christa Carone.