On Language: Actors, Even In Commercials, Are People Too 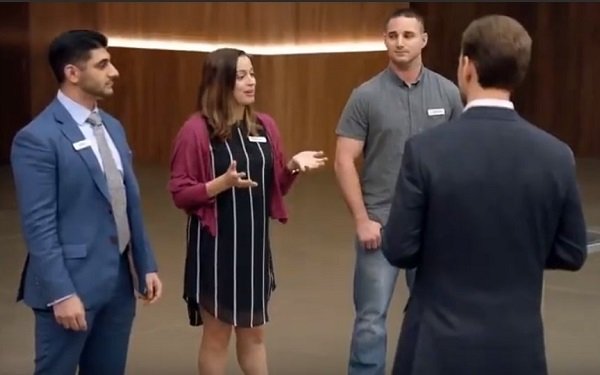 The last time I checked, actors were real people too.

What do the makers of TV commercials featuring “real people, not actors” think actors are? Robots? Automatons? Extraterrestrials?

The meaning of this wording in commercials such as the “real people” Chevrolet series (pictured above) is clear enough. The commercials are saying these participants are just like you and me. Their reactions are not forced, contrived or otherwise “acted,” supposedly.

But might there be a better way to say it than with wording indicating that actors are something other than people? Perhaps the wording could simply say: “These people are not actors.”

And by the way, for all we know, one or more of the “real people” in these commercials are actors -- only they are not practicing their craft in the commercials.

The integrity of actors is also besmirched when commercials go the opposite way and include wording that informs the rest of us that the people in commercials are actors. Typically, you will see someone costumed as a doctor or dentist, but wording placed discreetly onscreen will say “actor portrayal.”

Thus, actors are positioned here as fake professionals who are on hand because no real doctors or dentists could be found who would agree to make these commercials’ claims. These “actor portrayals” then call the entire commercials into serious question. This is not the fault of actors, however, who are doing the best they can with the material they are given.

It should come as a surprise to no one that as a profession, acting is a tough career to take up. Actors need work, even if the roles are simply being themselves (real people) or playing doctors and dentists making claims that real professionals won't touch.

Speaking of language issues on television, the TV Blog has long noted that the way locations are identified on TV -- specifically in scripted TV dramas here -- is cumbersome, wordy and in many cases, ridiculous.

This happens constantly. You're watching a far-flung drama in which the action moves from city to city, and on screen you are reading words such as “Moscow, Russia” or “London, England” or “New York, New York” or “New Orleans, Louisiana.”

The pictures setting the scene along with the words include widely recognizable landmarks such as Moscow’s famous onion domes, or Big Ben in London, or Times Square in New York. The country or state designation is superfluous and even slightly insulting.

Do the makers of these shows think that somehow a viewer might mistake Paris, France -- identified by the Eiffel Tower or some other globally recognized landmark -- with Paris, Texas, if they neglect to append “France” to the city's name?

It could be that the producers of these shows either doubt the basic intelligence of their audiences, or they simply have no background in writing according to widely accepted styles that have been long adopted by journalists. Among these is the tradition that a number of major cities around the world do not require state or country designations when used in datelines or within story copy.

Oh, well. Trivial as these points might seem, the TV Blog always remains hopeful that some of these suggestions and observations will make their way to the powers that be in Los Angeles. Oh, by which I mean Los Angeles, California, in case you are wondering.