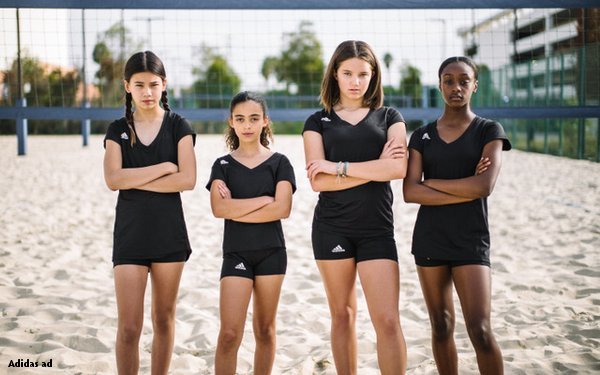 Organizers continue to hope the impact of International Women’s Day — March 8 — will eventually be measured in boardrooms, universities and hiring practices, but woman-friendly brands are eager to invite consumers on board, too.

This year, the effort includes teaming up with Twitter, which will livestream six games in the @3StripeLive girls’ high school sporting events globally.

Over at Etsy, which has been doing a brisk business in feminist-themed products for several years, the marketing team is going all out this year with a fearless females special collection that highlights Etsy makers as well as famous women. The company, whose marketplace is 87% women, is showcasing such offerings as Jane Austen cookie cutters, Justice Ruth Bader Ginsburg dissent collar baby bibs, Rosa Parks peg dolls and Jane Goodall posters.

*Always, owned by Procter & Gamble, is intensifying its #EndPeriodPoverty campaign, with the goal of providing 18 million period products this year, up from the 15 million it generated in last year’s efforts. Every time someone buys an Always or Tampax product this month, Always will donate one period product to the cause.

*Avon, which claims it’s been supporting women’s empowerment since it was founded 134 years ago, is marking the moment with an official partnership with The National Domestic Violence Hotline, reportedly the U.S.’ only national organization offering round-the-clock support and resources. To raise funds, Avon is selling a Purple Peace Charms of Strength Necklace this year inspired by victims’ stories, and donating 15% of the necklace’s $10 price to the organization. Packaging includes advice on how to talk to friends who may be experiencing abuse.

*H&M says it is celebrating both the day and Women’s History Month with a $200,000 donation to Girl Up, whose mission is empowering young women who defend gender equality. (The group was founded in 2010 by the United Nations Foundation.) Shoppers will also have a chance to make additional donations throughout the month at cash registers.

*Walmart is running a TV ad showcasing women who have risen through its management ranks.

Supported by such companies as MetLife, Amazon, McDonald’s and Diageo, International Women’s Day is helping organizations plan flagship events around the world, including a photo contest showcasing this year’s #BalanceForBetter theme.

New research from YouGov finds that some brands are inherently appealing to women, no matter what day it is. The new ranking says that in the last year, Procter & Gamble’s Dawn was in first place, up from No. 3 in the last survey, followed by Amazon, Hershey’s, M&Ms and Dove. Ring, GNC, Best Buy, Planet Fitness and Cabela’s topped the “most improved” list among women.