New 'Twilight Zone' On CBS Streamer Is Just Weeks Away 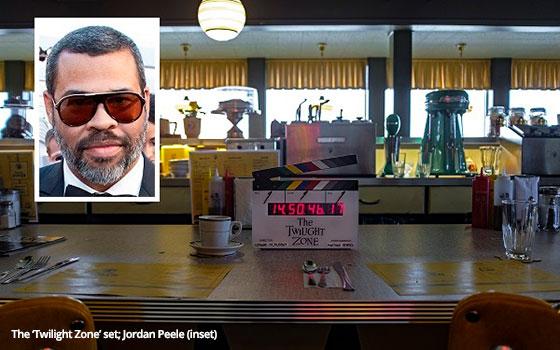 The single mention of “The Twilight Zone” occurred in the final paragraphs of the story in a list of “other” productions in which Peele's production company, Monkeypaw, is involved. The project featured most prominently in the story was Peele’s newest movie, titled “Us” and due to be released March 22 (a week from Friday).

“Issues of family and issues of equality are clearly on Peele’s mind beyond 'Us'," the story says. “His new television series ‘Weird City’ is also about the country’s deep economic divide, featuring denizens of a dystopian near-future who live in luxury and squalor, respectively, along a boundary called 'the line'," the story continues. (TV Blog note: Sorry for including the word “dystopian” here. Widely overused everywhere you look these days, this is the first time it has ever appeared here in the TV Blog.)

“A YouTube original starring Michael Cera and Gillian Jacobs, [“Weird City”] blends comedy and sci-fi, and is just one of the projects to emerge under the auspices of Peele’s bustling production company, Monkeypaw.

Others include Spike Lee’s feted ‘BlacKkKlansman,’ a ‘Twilight Zone’ reboot, which [Peele is] narrating, and the upcoming HBO series ‘Lovecraft Country,’ co-produced with J.J. Abrams and set in the Jim Crow South of the 1950s.”

A tentative or even general premiere date (or month or year) for “The Twilight Zone” is not mentioned -- nor is the platform for which it is being made, CBS All Access.

Maybe the writer of the story felt that CBS All Access was not nearly as cool as YouTube or HBO. Or maybe Peele underemphasized or even forgot to mention “The Twilight Zone” in the interviews he granted to this writer.

One would think that a new “Twilight Zone” -- especially one from a talent as hot as Jordan Peele -- would already be generating at least a modicum of excitement.

“The Twilight Zone” is one of TV’s premiere brands. Although the following statement is purely subjective, an argument can be made that pound for pound, the original “Twilight Zone” from producer/writer Rod Serling was the finest TV show ever made.

Now CBS intends to make it a centerpiece of its 4-year-old streaming service. On All Access, “The Twilight Zone” will join “Star Trek: Discovery” as the second reboot of an old hallowed TV brand to be produced for the CBS subscription streamer.

Early publicity put out by CBS suggests that “The Twilight Zone” is being rebooted at this particular moment because of what some perceive as a Twilight Zone-ish period in our current national life.

It is arguable that this particular national moment is no more (or less) Twilight Zone-ish than many other periods we have all lived through and survived. “The Twilight Zone” could have been made in any one of them, and maybe it should have been.

“Rod Serling was an uncompromising visionary who not only shed light on social issues of his time, but prophesied issues of ours,” reads a quote attributed to Peele that was included in CBS's first announcement press release for this new “Twilight Zone” last September.

If memory serves, one of the prime topics for Serling in the show's original incarnation was the constant threat of national or global annihilation from nuclear weapons. This was a subject that was often in the headlines in those days. And visitors from other planets would turn up pretty often also.

What will the new “Twilight Zone” be preoccupied with? Here's a wild guess: One word -- Trump.

Earlier this season, CBS felt strongly that another old show brand should be revived so that it could address that very same subject. This was “Murphy Brown,” which turned out to be the season's most notable miscalculation.