Thank You Mr. President For Making My Life Easier 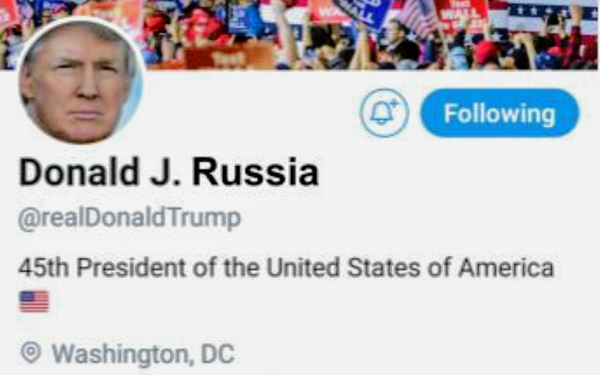 As an easy way to save time and words, this week’s column is about Donald J. Russia.

Specifically, it’s about how he constantly distorts reality, even over seemingly innocuous things -- like a simple verbal gaffe referring to Apple CEO Tim Cook as “Tim Apple.” Instead, he turns it into something far more insidious, and I would argue, dangerous for democracy.

You can see and hear it for yourself (below), but despite photographic evidence to the contrary, the President once again lied about an easily provable fact. Rather than owning up, he blamed “The Fake News” for disparaging him, adding: “It became yet another bad Trump story!”

The reason the President’s constant assault on the truth is so dangerous is that it is part of an ongoing media campaign to sabotage reality.

Who else wages active campaigns in the media to sabotage reality? According to U.S. intelligence agencies, it is the chief weapon -- or “active measure” -- in Russia’s hybrid warfare against Western democracies, including the U.S.

It was also those active measures, especially the social-media disinformation campaign waged by Russia’s Internet Research Agency, that our intel agencies say helped get Donald J. Russia elected in the first place.