On NBC, Fake 'Village' Is Supposed To Be Brooklyn 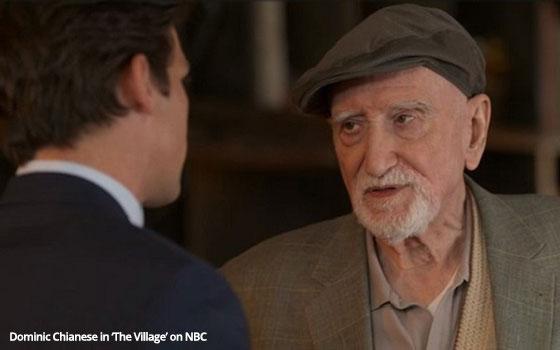 Maybe this kind of thing plays in Peoria, but around here -- meaning New York City -- you cannot get away with putting on a TV drama series that is supposed to be in Brooklyn but is obviously filmed in the Village, as in Greenwich Village in Manhattan.

And it doesn't help matters that the show in question happens to be titled “The Village.” Someone who saw a promo for this show the other night turned to me and said this show seemed like a great idea -- a drama about the close-knit neighbors in a Village apartment building, meaning Greenwich Village. New Yorkers rarely refer to “the Village” as “Greenwich Village.”

I told her it does seem like a good idea, but “The Village” in the show's title is supposed to be Brooklyn. This led to more confusion.

Then I previewed the premiere episode on Monday in advance of the show's premiere Tuesday night and, to my amazement, discovered that the show is filmed principally in the West Village, even the street where this old apartment house -- called The Village -- is supposed to be located.

It was certainly not Brooklyn, right down to the bar that one of the show's characters supposedly owns and operates -- Small's, which is mentioned and shown by name. Small's is a real place located around West 10th Street and Seventh Avenue. In the show, it is supposed to be within walking distance of this Brooklyn apartment building where all the residents know and like each other.

And that's another thing: In what alternative New York universe does that ever happen? In this show, the neighbors are all very involved in “looking after one another” -- like the mythical village Hillary Clinton once referred to when she popularized the phrase “it takes a village.”

By contrast, in the real-life New York City buildings in which I have lived, some neighbors have been cordial and even friendly. But “looking after one another”? In the buildings I have known, that would have been synonymous with not minding your own business.

Perhaps Brooklyn is different, however -- at least the fantasy Brooklyn on view in “The Village.” The characters living in this fictional Brooklyn building include the building's kindly owner (the man who also owns Small's), his wife who apparently has cancer, a wounded vet just home from one of the overseas wars, a nurse/caregiver of some sort who has a rebellious teenage daughter, a New York City cop, and a woman who is a long-time resident and immigrant from Iran who is picked up by ICE agents in the series premiere and threatened with deportation.

There is also a young law student whose grandfather is played by Dominic Chianese of “The Sopranos” (seen in the photo above). His old granddad does not live in the building but in some sort of assisted-living building that is evidently not very far away.

He is a rebellious oldster with the requisite twinkle in his eye who frequently leaves this assisted-living facility without permission and shows up in this the titular building's vicinity. In the premiere episode, he even ventures as far as Coney Island with two elderly pals where they enjoy various rides.

The whole show tries very hard in all moments to be heart-tugging, if not heartbreaking. In fact, the show tries too hard to be another “This Is Us,” to which “The Village” pales in comparison.

New Yorkers who attempt to watch this show might wonder why this show that is supposed to take place in Brooklyn was not filmed there. Or since it was filmed in the West Village, why didn't it just take place there, in the real Village?

It could be that everybody knows -- even the proverbial residents of Peoria -- that the real West Village today is inhabited almost exclusively by gazillionaires. For that matter, so is much of Brooklyn lately.

All of this is a wordy way of saying that reality is not this show's strong suit. But hey, if the spirit moves you, feel free to tune in and cry anyway.

new york, tv
3 comments about "On NBC, Fake 'Village' Is Supposed To Be Brooklyn".
Check to receive email when comments are posted.
Read more comments >
Next story loading