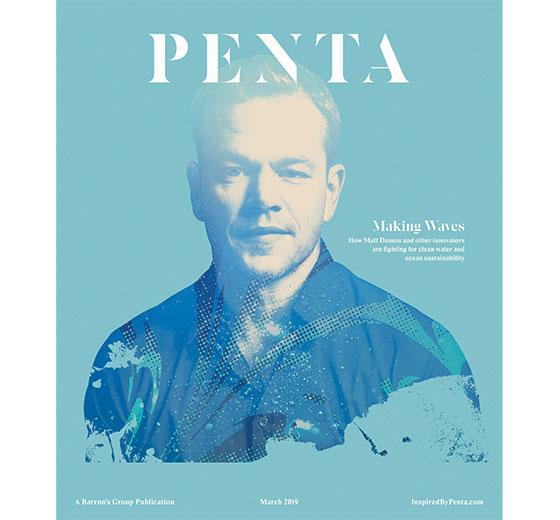 Penta, the quarterly lifestyle imprint of Barron’s, is dedicating its standalone site and latest print issue to coverage of clean water and ocean sustainability.

As of Monday and leading up to Earth Day on April 22, Penta’s homepage has a new look to promote clean water and ocean sustainability initiatives.

Its usual black logo has an ocean motif across it, and a “Water” category on the site dedicated to coverage of the issue.

New stories will be posted every day on the topic.

Last March, Penta focused on eco-friendliness for its spring issue, but this is the first time it has dedicated itself to the topic of clean water and ocean sustainability.

Penta’s spring print issue, which went out with Saturday's Barron's magazine, features Matt Damon on the cover and a feature story on his nonprofit organization Water.org, which focuses efforts on developing countries that do not have access to safe drinking water.

Penta’s coverage of clean water and ocean sustainability touches all five of its regular categories: Invest, Collect, Experience, Own and Give.“We will cover verticals we usually cover, and spin it a little bit to focus on [this topic],” Cheng said.

There is a story on impact investing in clean water, for example, and another on whether it is ethical to visit the Great Barrier Reef, due to its unstable environmental state.

When Cheng became editor of Penta in 2018 and relaunched the brand, she gave it “a mission”: “How a high-net-worth audience can spend their money to make smart choices that align with their passions and also make a social impact,” she said.

That ranges from the products and experiences they buy to what they invest in.

While Penta doesn't usually have celebrities on its cover, Water.org's focus on clean water “really speaks to the social impact cause we are looking at,” Cheng said.

It doesn't hurt that Damon's face and name are widely recognized and bring attention to the environmental issues at hand.

Cheng’s hope for the dedicated social impact coverage is to “ignite people’s passions, bring visibility to these issues, and inspire them to get involved... and go out of their way to highlight their causes and put their money behind it,” she said.

Adding the social impact angle to the Penta brand “has grown our audience,” she added.