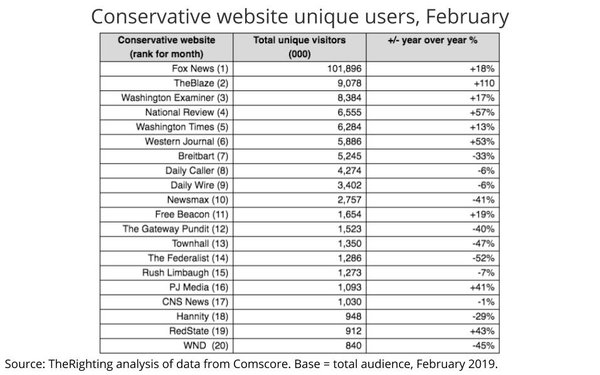 Right-wing political news site Breitbart had its sixth consecutive month of losses in year-over-year unique visitors, according to the latest edition of TheRighting.

TheRighting, which tracks conservative website traffic based on a proprietary analysis of data from Comscore, found Breitbart's unique users declined 33% in February vs. the same month in 2018.

Year-over-year uniques to Foxnews.com jumped 18%, its fourth consecutive month of traffic gains. Fox News had 101,896,000 uniques in February, up 15 million from a  year ago

CNN.com and the two other prominent mainstream media sites that TheRighting follows each month had relatively soft results for year-over-year unique visitors February 2019 vs. February 2018:  CNN.com (-7%), The New York Times brand (+3%) and Washingtonpost.com (-2%).

The top five right-wing websites in February based on the total number of unique visitors are: