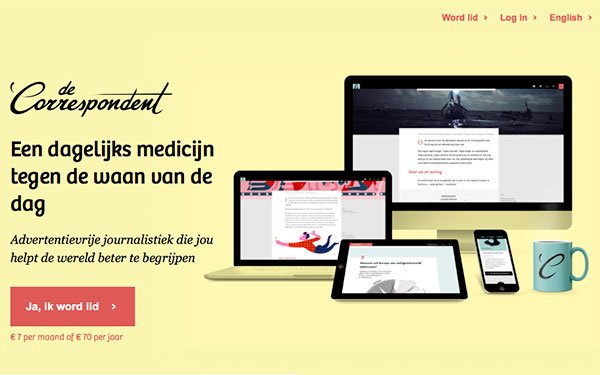 De Correspondent’s English language site, The Correspondent,is shutting down its new U.S. office to concentrate on building its team in Amsterdam, as it gears up to launch this fall.

The reader-funded, Netherlands-based news site raised $2.6 million from 45,888 members in over 130 countries for its campaign to launch an English version of the Dutch site, based in New York City.

Since that campaign ended, an additional 3,200 members have backed the ad-free site.

The Correspondent has now decided to be based out of Amsterdam entirely.

Cofounder-CEO Ernst Pfauth wrote in a Medium post: "We've closed our campaign office in NYC, and we have decided we won't open a newsroom in the U.S. for now."

“We don’t aim to be a national U.S. news organization (we have founding members from more than 130 countries around the world!) but instead want to cover the greatest challenges of our time from a global perspective — in English,” he continued. “For that vision, Amsterdam is as a great place to start.”

Some 56 staffers work out of the newsroom in Amsterdam.

The Correspondent plans to launch its English language site on September 30, with correspondents “based all over the world.”

“They’ll work from places that make most sense to their respective beats, and we’ll catch up with them in our Amsterdam newsroom multiple times per year (we’ll compensate our travel emissions tenfold),” Pfauth wrote.

Some members who believed they had contributed funds for the English language site’s home in the U.S. are not happy, voicing their confusion on Twitter.

One of the main reasons behind the decision to stick to The Netherlands, according to Pfauth’s post, was the difficulty of fostering “one company culture” across the Atlantic Ocean.

“We learned during the past year this is a challenge when the distance between teams grows. Remote working is perfectly possible, of course, but only if you have a shared sense of a ‘company home,’” he wrote.

Simply, De Correspondent wanted its leadership team in one office for better collaboration.

Pfauth also touted Amsterdam’s advantages as “a great place to work and live.”

“There’s a great public infrastructure and a robust public health-care system, the cost of living is relatively low compared to other global cities, and almost everyone speaks English," he wrote.

A Correspondent spokesperson echoed this sentiment to Publishers Daily, noting that setting up a second office means extra costs, like rent.

"We have not changed our promise to our members to launch an English language journalism platform, with correspondents based in both the U.S. and several other places in the world,” he said. “What we have decided is to locate our core supporting roles (for example our membership director and member-support team) in our existing HQ in Amsterdam. In short, we will definitely have a U.S. presence, just not a second office," he notes.