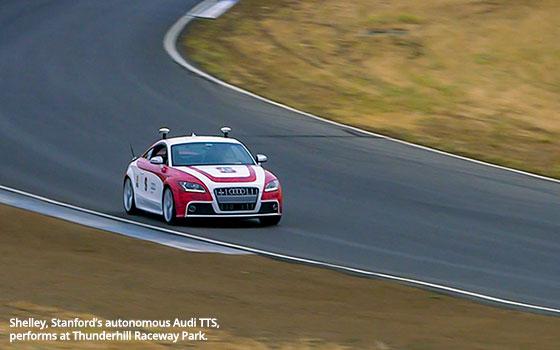 Artificial intelligence is being used for controlling autonomous cars.

Stanford University researchers developed a system for controlling a vehicle by integrating past driving experiences to aid how a car can perform in extreme or unknown circumstances.

Using a Volkswagen GTI and Stanford’s autonomous Audi TTS, the car performed like an existing autonomous control system and an experienced racecar driver, according to the study.

The researchers created a neural network to integrate data from past driving experience, using a closed course study of racing performances of the first five turns at the Thunderhill Raceway Park in California. The automated vehicle and human attempted to do the course in the minimum amount of time, approaching speeds of 95 miles per hour.

The research focused on autonomous vehicles adapting from normal conditions to driving in ice and snow.

Self-driving systems typically rely on real-time evaluations of their surroundings, such as identifying objects ahead, while the Stanford study incorporated data from recent maneuvers and past driving experiences. For example, the system included data from trips around an icy test track near the Arctic Circle.

“If we can develop vehicles that have seen thousands of times more interactions than we have, we can hopefully make them safer,” states one of the researchers.

iot
1 comment about "Stanford AI Teaches Autonomous Cars To Learn From Mistakes".
Check to receive email when comments are posted.
Next story loading