New 'Twilight Zone' Is More Than Worthy Of The Original 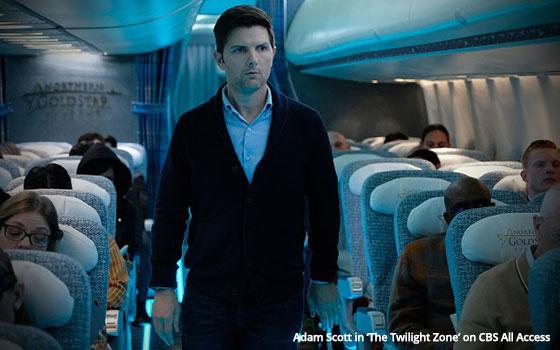 Only in a twilight zone could a new “Twilight Zone” prove itself worthy of the original, right?

Wrong. Here in the real world, this new “Twilight Zone” from Jordan Peele, produced for the CBS subscription streaming service known as CBS All Access, is a straight-up home run.

Previewing the first two episodes -- which begin streaming today (Monday, April 1) -- produced the same uncomfortable feelings and eerie sensations as the original, but only more so.

To be fair to the first Rod Serling “Twilight Zone,” a measure of its greatness was due to the way it made do with the now-limited technical tools to which it had access in the years 1959 to 1964.

Certainly, this new one possesses a technical flair that was not available to the original. Or to put it another way, the new “Twilight Zone” makes full use of the tools available now to filmmakers producing content for television, and it makes the most of them too.

Like Serling, Peele appears at the beginning and end of each episode. In this role, Peele does nothing to deviate from the Serling formula, a strategy that is both shrewd and respectful.

Of the first two episodes, only one is recognizable as being related, however vaguely, to an original “Twilight Zone” classic. It is titled “Nightmare at 30,000 Feet” and it seems loosely based on “Nightmare at 20,000 Feet,” a 1963 episode in which William Shatner famously played an airline passenger who sees a gremlin crawling out on the aircraft's wing but cannot convince anyone else that the plane is in danger.

In the new one which flies 10,000 feet higher, Adam Scott plays the passenger no one will believe when he stumbles on a podcast at the outset of his flight that tells the story about how that very flight will come to a tragic end.

The story is much more elaborate than the Shatner episode. But the best part of the new one is that it appropriately reflects and delineates fears and anxieties that are prevalent today in our modern world -- which is exactly what the old “Twilight Zone” did in its own era.

It is a great episode and so is the second one making its debut on Monday. Both episodes far exceed the length of the first “Twilight Zone” episodes, which were produced to fit into a half-hour of network prime time.

The new “Nightmare at 30,000 Feet” is just over 36 minutes long. The second episode, titled “The Comedian,” is 54 minutes. In this one, an ambitious stand-up comedian (played by Kumail Nanjiani) finds his voice with new material that, unfortunately, has tragic consequences for those he mentions in his act.

In his own personal “Twilight Zone,” he then wrestles with the price he is paying for fame -- or more to the point, the price he is causing others to pay for his success. He is faced with making a choice to be either ruthless or compassionate. It is a highly provocative situation that could only exist in “The Twilight Zone.”

Whether or not this new “Twilight Zone” appears attractive enough to pay for is a decision the TV Blog leaves up to each individual.

As one who is old enough to remember the various versions of the original “Twilight Zone” that all aired on free TV, paying to watch this new one feels kind of like being in a twilight zone of my own. Cue eerie theme music …

“The Twilight Zone” starts streaming on CBS All Access on Monday (April 1).