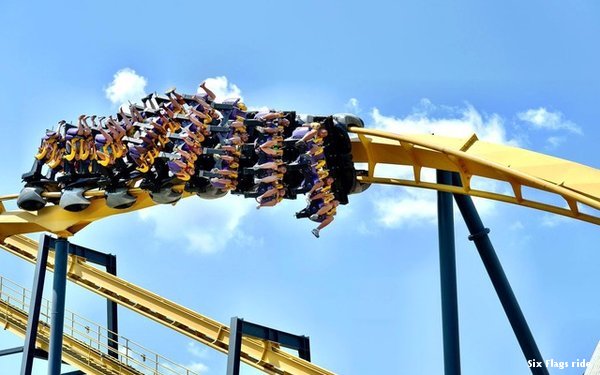 It’s April, which means millions of teenagers are eager to scream their heads off at the nearest theme park, and a new report from Wedbush Securities says they’ll find plenty to challenge their vocal cords.

But some of the most harrowing rides will be among the players themselves, as companies like Six Flags, Disney, Universal, Sea World and Cedar Fair thread their way through changing competitive landscapes.

The report, from analyst James Hardiman, who covers the sector for Wedbush, predicts a tough uphill climb for Six Flags. Disney and Universal remain locked in a sort of arms race, of course. But he writes that Disney is readying its Star Wars’ Galaxy’s Edge attraction earlier than anticipated due to intense guest interest, which “puts further pressure on SeaWorld.”

In fact, Disney is so confident of the success of the new Star Wars attraction -- which it calls its most ambitious ever -- that the company has said it won’t spend much on marketing.

Universal, of course, hasn’t been sitting still, with an addition to the Wizarding World Harry Potter set to open in mid-June, called Hagrid’s Magical Creatures Motorbike Adventure. The Orlando attraction will let guests travel through 1,200 trees of the Forbidden Forrest at speeds up to 50 mph.

It’s also teased a new Jurassic World ride in California, with plenty of dinosaurs and an 84-foot waterfall. But perhaps most important, Hardiman writes, is the “ramping (and well-founded) speculation that Universal is preparing to announce a whole new theme park in Orlando, which could be the largest yet in the critical market.”

Wedbush says that Sea World, which owns Busch Gardens and Sesame Place, is most threatened by the much-larger Disney and Universal. Wedbush thinks Sea World’s smart approach to season passes this year should help, allowing it “to lock in as many customers as possible ahead of an unprecedented slate of competitive rides and attractions from Disney and Universal.”

And while Six Flags has plenty of challenges -- including a management shake-up and tough comparisons from last year -- Hardiman believes a push toward tiered membership passes may help the company. Season tickets cost between $70 and $80, while memberships go for between $120 and $130.

Cedar Fair Entertainment Co., owner of Cedar Point, Kings Dominion and Dorney Park, announced this week that it would introduce Grand Carnivale at four of its parks, designed to “engage park guests in the energy, splendor and mystery of China, France, Germany, India and Italy with authentic food, signature beverages, music, dance and performances.” The event includes parades with floats, and costumed performers throwing beads to the crowd.