Panera Rises To #Bagelgate; May Even Make Some Dough 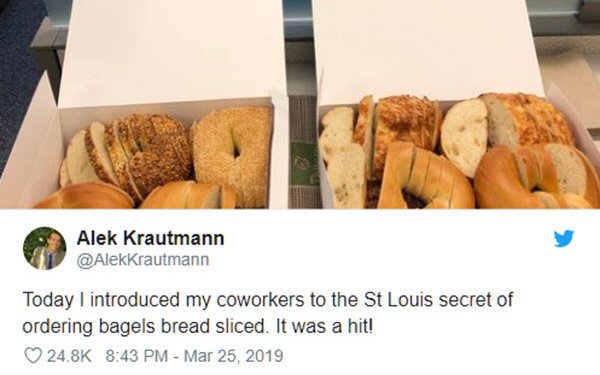 Panera Bread gets a gold star for scrambling to capitalize on a fluky social media opportunity.

As Twitter users couldn’t help but notice, #Bagelgate blew up on the social channel last week.

A recap for non-tweeters: Midwesterner Alek Krautmann set off a national furor after innocently tweeting a photo of bagels sliced vertically, like a loaf of bread (above), instead of horizontally, as is customary.

The bagels were purchased at St. Louis Bread Company — the original name of Panera Bread, and the name still used in the St. Louis market, where it was founded in 1983.

But bagel aficionados — and yes, New Yorkers in particular —went apoplectic over what they deem to be a cultural and culinary sacrilege.

Panera Bread tells Marketing Daily that within 12 hours after #BagelGate went viral, its marketing team had conceptualized and implemented billboards throughout St. Louis. The OOH ads feature an image of a vertically sliced bagel, the words “STL PROUD” and “#SaintLouisProud,” and the St. Louis Bread logo (which is visually the same as Panera’s logo, aside from the name itself).

Panera also scurried to work with Arch Apparelto design and sell a $32 custom T shirt bearing “Bread Co.” on its front and “Sliced in Saint Louis” on its back.

Panera employees at 25 locations also donned the shirts, according to the St. Louis Post-Dispatch.