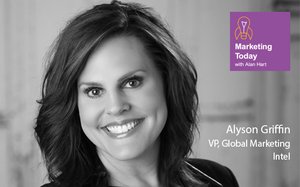 For this week’s episode of “Marketing Today,” I speak with Alyson Griffin, vice president of global marketing at Intel, where she’s recently taken the reins as global marketing lead for Intel’s IoT Group.

During the course of our conversation, Griffin talks about her decision to leave pharmacy school in something of a seismic career shift, her subsequent decision to leave HP after 17 years for an opportunity with Intel, and her advice for young marketers. The common thread that ties those elements together: change.

As Griffin explains, “For young marketers, in general, I’d say that change is good. I love change, and some people don’t, and I’ve always kind of scratched my head about that. Going into a different business unit or a different company or a different geography or even a different function... changing like that is really important — to be well-rounded, to get different experiences and different points of view.”

Griffin goes on to add, “Don’t be afraid of it. I’ve done it a lot in my career, changing, and I think it’s just made me a better listener and a better leader.”

Highlights from this week’s “Marketing Today” podcast include: