Oscars And Emmys Ask: Is Netflix A Movie Or TV Company? 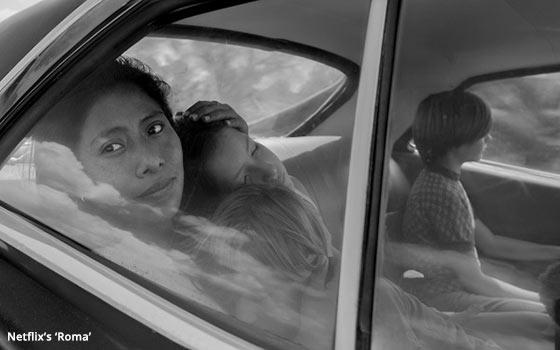 The Oscar issue is making headlines this week, but in the TV business, the Emmys are likely asking themselves similar questions -- namely, what is TV? And is Netflix (and other subscription streaming services, for that matter) actually in the TV business?

The issues involved are complicated. In the Oscar struggle, the motion-picture industry is asking if made-for-Netflix movies are, in fact, movies. Or are they made-for-television movies, which would then make them ineligible for Oscar nominations?

The subject made headlines this week because the Justice Department sent the Motion Picture Academy a warning that the department considers a proposal now being discussed at the Academy that might exclude Netflix from award consideration to be a possible violation of antitrust law.

In other words, Justice thinks excluding Netflix in this way would represent collusion on the part of the movie industry and its biggest companies to keep a major new competitor out of the Oscar race and the spotlight that results from it.

At issue is the definition of what constitutes a “movie.” Classically speaking, a movie would be filmed entertainment that you have go to a theater to see. According to The Wall Street Journal, Netflix today is the industry’s leading producer of movies, yet few of them get released to theaters.

The rule-change proposal under discussion at the Motion Picture Academy would require wider distribution in theaters for movies from all sources to be considered for Oscars, not just Netflix.

Yet Netflix is the brand that always gets mentioned in these contexts. The Netflix movie, “Roma,” has emerged in recent months as Exhibit A. Critically acclaimed but released only sparingly in actual theaters, “Roma” was nominated for 10 Oscars earlier this year, including Best Picture and Best Foreign-Language Picture (which it won).

Most of its audience saw it on Netflix, where it is still available and will likely remain available for some time (if not forever). In the WSJ story about the Oscar proposal this week, Steven Spielberg was quoted from an interview he conducted last year as classifying “Roma” as “a TV movie. … If it’s a good show [then it] deserves an Emmy, but not an Oscar.”

The problem underlying the whole issue, however, would seem to be the way that filmed or video content is consumed today. Technology that is now available to the average household has eroded the audiences that once flocked to movie theaters.

People can buy big-screen TVs now with spectacular picture quality and the audio that goes with it. The streaming services have evolved to serve this audience with a motion-picture experience in their own homes.

Of course, this experience goes even farther than the theater experience because there is no menu of choices at a movie theater once you are in your seat. Subscribing to Netflix is also far cheaper than movie tickets.

If movies made for Netflix, or TV generally, are to be excluded from the movie industry's biggest awards show, then what will be left? Increasingly, movie theaters seem to be destinations for a sensory and aural experience that is not easily duplicated at home. This seems to be why the preponderance of big-screen movies today are special-effects driven, action-packed superhero movies derived from comic books.

In the final analysis, the Oscar struggle seems to be a struggle against the evolution of movie-viewing from theaters to homes -- which would seem to threaten the very definition, if not the very existence, of what has long been considered to be a motion picture, which is something viewed in a theater on a vast screen in the dark in a crowd of strangers.

The TV industry would seem to be the beneficiary of this evolution because TV has already been an in-home entertainment source for decades. And now, the TV-viewing experience is of such a high quality that in many ways it approximates the theater experience -- minus the strangers.

However, where the Emmy Awards are concerned, there is now, and has long been, a tale of two cities when it comes to the production of TV content. They are shows produced for an advertiser-supported environment, and content produced strictly for subscribers that has none of the restrictions that sponsored content labors under.

Thus, the Emmys are also in a Netflix quandary of their own. Or to put it another way, now that “Roma” has had its big Oscar push, why shouldn't it also be considered for Emmys? It is as if Netflix is saying: We make movies for both television and theaters. Therefore, we should be eligible for both awards, often for the same production.

If this floodgate is opened, it won't be long before other TV companies produce TV movies that are also seen in theaters, further diluting the movie and TV waters.

What will give way? In the final analysis, it will likely be movie theaters. Technology has made the home the center of everyone's universe. Why shouldn't the movie biz be disrupted like everything else?