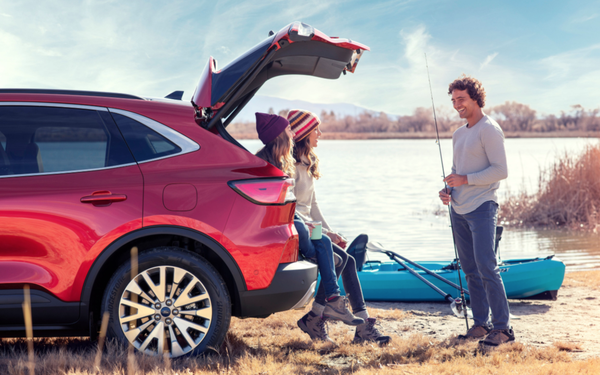 Ford Motor Co. pulled out all the stops recently when it revealed the 2020 Ford Escape SUV.

The media often gets the first glimpse of new and restyled vehicles at auto shows, but Ford has started taking a different approach. Instead of being confined to a 20-minute press conference on a convention hall floor, the automaker has been pulling the drapes off new vehicles in some unusual places.

As opposed to using the North American International Auto Show in Detroit, the Ford Explorer was revealed in January during an elaborate event for press and employees at the Detroit Lions football stadium to which the automaker has the naming rights, Ford Field.

This time around, instead of waiting for the New York International Auto Show next week, Ford chose Greenfield Village, an outdoor history museum complex and a National Historic Landmark near its Dearborn, Mich. headquarters that includes Thomas Edison's laboratory and the Wright Brothers' bicycle shop.

Ford’s event agency, Imagination, created an elaborate setting for the event, a small town called “Escapeville.” After a mini-parade featuring musicians, acrobats and basketball players, media members were separated into smaller groups, and more traditional aspects of a new vehicle reveal (like engineering and technology backgrounders) took place in some of the historic shops.

The vehicle doesn’t go on sale until the fall and that’s when its advertising will break under the “Built Ford Proud” banner. It will be the first campaign from new AOR, BBDO, which takes over creative duties from GTB, says Craig Patterson, Ford SUV marketing manager.

“They're really excited about having a vehicle that has a point of view and that has an image that we're trying to emphasize rather than just a laundry list of features and rational reasons to buy,” Patterson tells DriveTime. “Really what you want is for people to emotionally fall in love with the vehicle.”

There is a “sea of sameness” in the small SUV market, Patterson says. However, the Escape’s niche is “having a great design and being fun to drive,” he says. It’s sleek, urban and more car-like.

“It you try to be all things to all people, you end up with a very average vehicle that doesn't do anything really well,” he says. “This one will be really good on-road” as opposed to the upcoming Ford Bronco, which will be more focused on off-road capabilities.

Ford is positioning the new Escape as being “urban intelligent.”

“It's very responsive, nimble, perfect for an urban setting, but that's not the only place that it can go,” Patterson says. “If people are buying utility, it's because it's versatile and needs to be able to live in a lot of different places to be able to take care of all the different things in their lives. You might have the weekend where you go camping, or you might have the need to transport dogs or you might be into golf; you need to have the utility versatility to do it.”

The Escape debuted for the 2001 model year and in its first full year on sale, became America’s best-selling small SUV. In 2005, the Escape debuted the world’s first hybrid SUV. This new version again leads the way in technology with two different hybrid engines as options. The standard hybrid targets best-in-class EPA-estimated range of more than 550 miles while the plug-in hybrid targets a best-in-class EPA-estimated pure-electric range of 30+ miles.

The vehicle will have new sliding second-row seats that enable best-in-class second-row legroom and as much as 37.5 cubic feet of cargo space. To create a sportier look, designers turned to the sports cars in the Ford showroom. The shield-shaped trapezoidal grille is inspired by the sixth-generation Mustang, while the lower front end borrows from Ford GT. Compared to the current model, the all-new Escape stands lower, wider and longer. Meanwhile, it sheds more than 200 pounds from the current model, due in part to the extensive use of high-strength, lightweight steel.

“This new vehicle performs like no other Escape before,” states Jim Hughes, Escape chief program engineer. “It’s quick, it’s responsive and, in staying true to the standard set by three generations of Escapes before it, it’s a heck of a lot of fun to drive.”