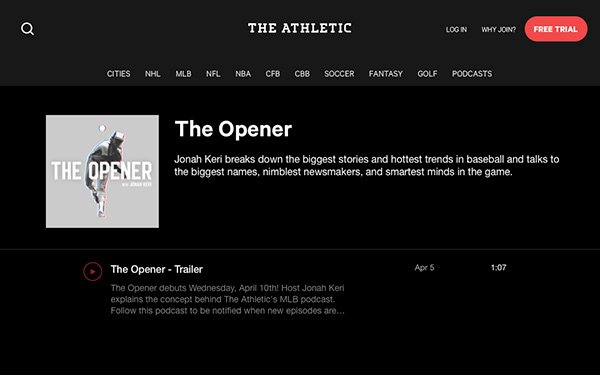 a subscription-based, digital sports media company, is launching a podcast business behind its paywall.

It will offer over 20 ad-free podcasts available only on The Athletic’s app and website, according to Axios, which first reported the news.

The Athletic claims over 100,000 paid subscribers and a 90% renewal rate. Annual subscribers pay $3.99 a month after a one-month free trial, or $9.99 a month for a month-to-month subscription.

The podcasts are produced by a team of 12 new hires at The Athletic, including hosts, producers, engineers and audio specialists.

In October, The Athletic announced it had raised $40 million as a part of its Series C fundraising round, which valued the company at roughly $200 million. At the time, The Athletic said the funding would help drive subscriptions, building out teams focused on audience, data and editorial, as well as those devoted to developing podcasts and video.

The fundraising round grew the media company’s total investments to $70 million, since launching in 2016. The Athletic has over 300 full-time employees.

The Athletic's new lineup of podcasts focuses on specific teams and cities, supported by hundreds of reporters in over 50 markets. Some podcasts also cover wider topics, like sports and media, as well as sports leagues. The podcasts range from 15 to 40 minutes long.

The podcasts cover the NBA, NHL, NFL, MLB and fantasy sports. Fifteen focus on local sports in the Bay Area and Toronto.

One of those podcasts is “Warriors Plus-Minus,” featuring The Athletic’s Marcus Thompson and Tim Kawakami. Other local podcasts will launch in the future.

“The Opener” with host Jonah Keri, covers the biggest stories and trends in baseball and debuts April 10.

“The Breakout,” an NHL podcast focused on the Stanley Cup Playoffs, is hosted by Fox Sports, ESPN, and Barstool Sports alum Julie Stewart-Binks, as well as Billy Jaffe and Craig Custance.

“The NBA Daily Ding” is a daily, 20-minute podcast that gives a roundup of the previous night's NBA game, hosted by Zach Harper, Dave Dufour, Wosny Lambre and Travonne Edwards.

The Athletic plans to acquire podcasts and add more to its lineup in the coming months.