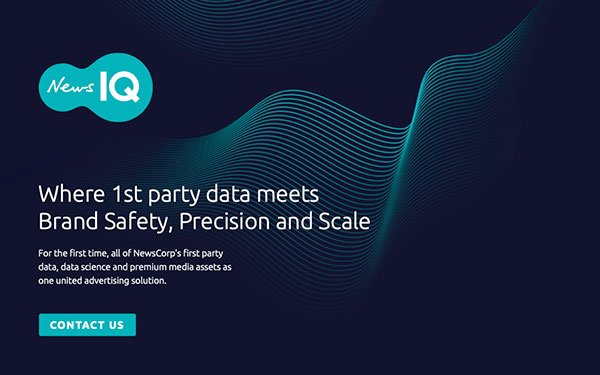 In 2018, News Corp and precision audience targeting platform NewsIQ commissioned a study from Nielsen Media Lab to uncover the power of news websites on consumer behavior and brand perception.

The survey found news sites drive a significantly higher increase in purchase intent and recommendation when compared to categories like sports, travel and entertainment. It also showed that news content increases positive brand perception and affinity.

NewsIQ itself was launched in 2018,  the same year the study was conducted.

The platform was developed by News Corp. after its success with News Connect, which launched a few years ago across its Australia properties. News Connect brought together local newspapers, regional hubs and other first-party data.

News Corp’s U.S. properties, including the New York Post and its sites, Dow Jones, and even some Harper Collins sites, all had different ad tech stacks and organizations.

Building NewsIQ required stitching together each of the disparate sites and adhering to transparency regulations, ensuring the audience is aware of its data-gathering methods. The company created a consistent platform across its business units and built out its own new DMP.

The platform allows the company to collect first-party data and also bring in partner and third-party data when needed.

“We have a better understanding of engagement with our collective business units, whether that’s someone looking at real estate or checking out the latest gossip on PageSix,” said Guenther. “That’s all well and good, but that’s an internal success.”

NewsIQ has delivered measurable success with outside clients over the past year, many have signed on for additional campaigns.

For example, Guenther cited a project NewsIQ undertook with a large financial services company that wanted to target a high net-worth individual, something generally difficult to achieve. By leveraging first-party data points and its scale across all properties and partnering with another News Corp business unit that created branded content, the campaign was able to surpass expected KPIs and saw success with engagement across content.

“Prior to NewsIQ, offering that type of scale and targeting was something we wouldn’t have been able to do,” he said.
Matching branded content created by Dow Jones or a bespoke ad unit built by the New York Post team has proved a draw to advertisers.

“What is important to us, is thinking about the right data as we get signals from our users and how they interact with our sites,” said Guenther. “We’re considering what indicates propensity for an action, what is a valuable signal on a valuable data point and how do we capture that and leverage it with advertisers.”