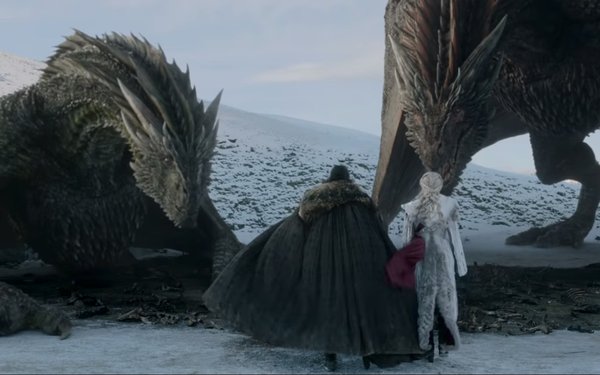 Despite the ratings groans, HBO airing the final season premiere of “Game of Thrones” proved to be a big TV program deal -- a throwback of sorts, something that is increasingly rare when it comes to scripted TV entertainment.

The show pulled in a solid Nielsen 17.5 million in total viewers, according to the premium cable TV network, with plenty of marketing and social media spin.

On the HBO linear cable TV network, there were 11.8 million TV viewers who watched at 9 p.m. Sunday night, with the remaining total coming from two encore presentations, as well as those streaming on HBO Go or HBO Now apps.

One show at 17.5 million may not sound like much -- especially when compared to ad-supported TV programming on CBS, NBC and other networks.

For example, CBS’ “Big Bang Theory” -- ending this season -- has been averaging 12.9 million Nielsen TV viewers, while CBS’ “NCIS,” renewed for next year, is at 12.2 million. TV networks also account for other time-shifted viewing, which adds to this total.

CBS will get its own shot at a big viewing event soon with the final episode of “Big Bang Theory” next month. ABC will be doing the same with its longtime comedy “Modern Family.”

Still, the hype around “Thrones” is good news -- at least when it comes to a live airing of a scripted entertainment show, considering HBO’s linear TV network still only gets about half the TV homes CBS, NBC, Fox and ABC do.

Much of this can be focused on what analysts increasingly call the “premium” modifier of live TV, which most associate with all major sports events.

Of course, “Thrones” is a different play. The live program model these days mostly focuses on the premium prices TV advertisers pay for a sports media schedule, something that doesn’t concern on ad-free HBO content.

Still, this is the live TV buzz that people believe Netflix can’t really get. For example, in the case of “Thrones,” there were Season Eight premiere parties -- with people dressing as their favorite characters -- and big viewing events in bars and restaurants.

For all that is touted about Netflix, it doesn't get this collective viewing experience from any of its season premieres or season finals shows.

Perhaps that speaks to its intense focus with on-demand, ad-free programming that viewers watch on their own schedules.

Still, beyond looking at strong critically positive reviews for its shows -- or big awards in the form of Emmys, Oscars or other hardware -- Netflix may look at “Thrones” and wonder: How can we get that?