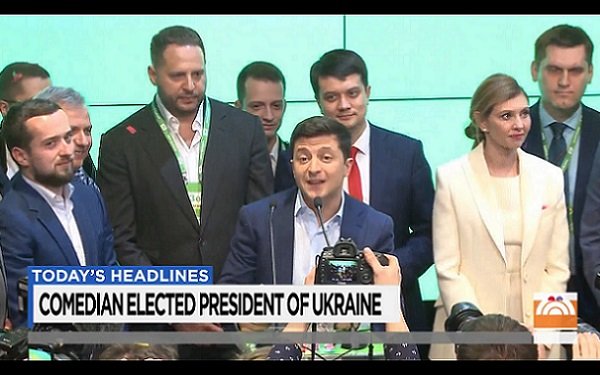 He’s not a president, but he plays one on TV!

Not only did Volodymyr Zelensky, 41, win the presidential election this past weekend in Ukraine, but he won it with an estimated 73% of the vote to oust incumbent Petro Poroshenko, 54.

In the aftermath, it is reasonable to imagine Poroshenko feeling much the same way Hillary Clinton must have felt after she lost to Donald Trump: I lost to who?

On the other hand, there might be all sorts of reasons relevant to the political situation in Ukraine for why Zelensky won this election. And the TV Blog has no special expertise on that situation.

But we know a little bit about TV, TV stars and TV shows -- which is why the ascendancy of this sitcom star to the presidency feels as stunning as our own country’s election of a man who may or may not be an actual real estate mogul and business titan in real life, but Donald Trump played this role on TV. And for all intents and purposes, it is the persona Trump honed on TV that got him elected.

Zelensky was the star of a comedy series on Ukraine TV called “Servant of the People,” in which he played a fictional president. In his campaign for the real-life presidency, he formed a party called Servant of the People, which melds TV and real life in a way we had not ever seen before -- not even in the election of Donald Trump.

For Trump, the equivalent would have been to form a new self-styled Apprentice Party to run under, rather than seek the Republican nomination.

In various descriptions of Zelensky, he comes across as something more than just a mere sitcom star. In some accounts, he seems more like a Ryan Seacrest type with interests in various production projects than a Jerry Seinfeld.

As a sitcom star, Seinfeld would not make an attractive presidential candidate based on the character of the same name he played on “Seinfeld.” Or to put it another way, he would not receive the coveted endorsement of the TV Blog. Sorry, Jerry.

One of his co-stars, however, might currently be the closest thing we have to a Volodymyr Zelensky -- Julia Louis-Dreyfus. She could run as the character she plays on HBO's “Veep,” Selina Meyer, possibly as the nominee of a newly formed Veep Party.

In all seriousness, the elevation of TV stars to national offices such as a country’s presidency is troubling. It does seem as if the average person votes for such people because they have come to like them based on a faux personality these entertainers have created for TV.

It's like that old movie “A Face In the Crowd,” in which Andy Griffith played a country bumpkin named Lonesome Rhodes who became a TV star who everyone in America seemed to like. But off-screen, the guy was Loathsome Rhodes, a real unlikable train wreck of an individual.

The TV Blog’s own experience, from years of encounters with TV personalities (including the current President of the United States), reveals that presidential timber is a rare commodity in the American community of TV actors and actresses, news people, reality stars and talk-show hosts.

On the other hand, maybe Ryan Seacrest will someday use his morning talk show (the one with Kelly Ripa) to launch a 2020 presidential campaign as the nominee of a new American Idol Party. From American Idol to American President does not sound too farfetched today.