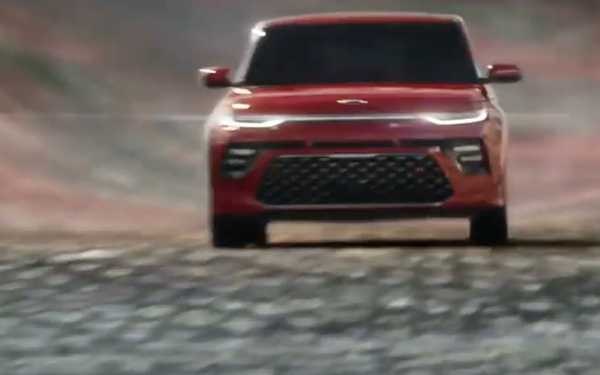 There are no hamsters in Kia’s other-worldly campaign for the 2020 Soul.

However, viewers who stick around until the end of the 30-second spot from David&Goliath will encounter a surprise ending that might make them watch the spot a second or third time.

With an expanded lineup including the rugged X-Line, sporty GT-Line and the sophisticated EX Designer Collection Package, the latest incarnation of Soul is the embodiment of Kia’s “Give It Everything” mantra.

The centerpiece of the campaign is the broadcast spot, entitled “The News Species of Soul,” which stars three versions of the third-generation Soul. The spot includes an upbeat original soundtrack. It shows the three models driving on what could be the uneven terrain of the moon  -- but it’s not.

As the three Souls unite, the various locales are revealed to be a chameleon’s body with its shifting textures and changing colors -- just before the larger-than-life lizard slurps up all three Soul models with a satisfied smirk.

“While nearly everything about the Soul is different, this campaign continues the fun and irreverent attitude that turned Soul into an icon over the last decade,”  states Saad Chehab, vice president, marketing communications, Kia Motors America.

The Soul was first introduced in 2009. In March 2019, the one-millionth Soul was sold in the United States.