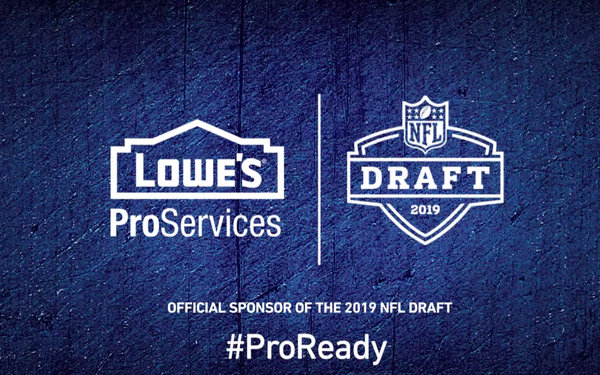 Lowe’s, which has just become the NFL’s official home-improvement retail sponsor, is turning pro for the NFL Draft, launching a campaign aimed at construction professionals.

Besides turning the construction of the NFL Draft Stage into a marketing event, with plenty of athletes on hand to swing some hammers and lay down 42,000 feet of 4X6’s, the company is also launching a campaign using TV, as well as out-of-home ads in Nashville, which is hosting this year’s draft, and in New York’s Times Square.

It’s the chain’s first-ever NFL-themed spot, says CMO Jocelyn Wong, “and highlights some of the efforts we have made to step up our game so pros can get more done right, from hiring new pro managers to dedicated parking and pro loaders on hand at stores nationwide.”

She tells Marketing Daily that the ad, created by Conill, is running on NFL Network and other channels where the NFL Draft will be broadcast.

The pro category makes up about 50% of the U.S. home improvement product market, and Lowe’s sees it as its No. 1 growth opportunity over the next couple of years. “We’re laser-focused on capturing that opportunity by providing pro customers with a differentiated experience that saves them time and money so they can grow their businesses and achieve their long-term goals,” Wong says.

And while the company plans to roll out more NFL-linked initiatives, capturing a moment when amateur athletes are about to “go pro” felt like “an ownable opportunity for us to demonstrate how we’re upping our game, as well.”

The effort also includes local activations and a cause-related component. Tennessee Titans tight end and Pro-Bowler Delanie Walker is scheduled to surprise a local pro customer on a job site, while Titans linebacker Wesley Woodward is set to go undercover at a Lowe’s store in Nashville, working at the Paint Desk.

The Mooresville, N.C.-based retailer is also working with the NFL, providing turf to area Boys & Girls Club fields, picnic tables to a local Habitat for Humanity chapter and planting trees in common areas in Nashville.