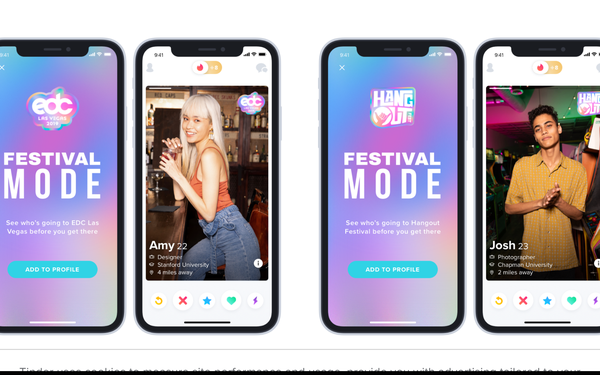 The big rock concert season is here, and Tinder wants to help.

The hook-up app noted for facilitating casual sexual liaisons has just announced Tinder Festival Mode, which will give users the ability to connect in advance with potentially dateable members going to the same music event.

By enlisting, they get an onscreen badge announcing the festival they’re attending, and see others who are also headed their way.

Or as Tinder described it: “You can check out everyone else going to that festival, so you can match and chat before you make your flower crown.”

By signing up for Festival Mode, members also have a chance to receive VIP upgrades and concert swag.

Keeping the customer satisfied, in this instance, was a simple decision. “We consistently see a spike in Tinder use as tens of thousands of music fans come together, so we wanted to create a new experience that makes it easier to connect with other concert-goers before even setting foot on festival grounds,” stated CMO Jenny Campbell.

The list of a dozen participating concerts this spring and summer include four in the U.K. The first ones in the U.S. are the EDC concerts Las Vegas (May 17-19) and the Hangout concerts in Gulf Shores, Alabama on the same dates. Other stateside concerts giving Tinder members a chance to swipe right are the Governors Ball in New York City, Bonnaroo in Manchester, Tenn., Firefly Music Festival in Dover, Del., Faster Horses in Brooklyn, Hard Summer in Fontana, Calif., and EDC, again, in Orlando. The concerts are sponsored by Live Nation or AEG Worldwide.

According to Business of Apps, Tinder has 57 million users worldwide who go on one million dates a week (that stat credited to Tinder itself).  Its core base of users are 18-24, which presumably matches the demo for big concert events. Tinder has increasingly aimed at serving that crowd. Last year it started Tinder U., which lets college students find each other easily, if briefly.