Spectrum Leaves No Cliche Behind In New Original Cop Drama 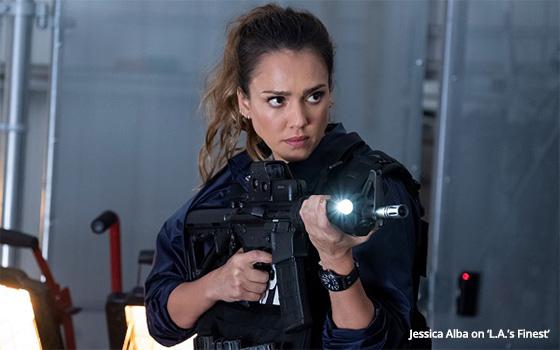 If you told someone this new cop drama called “L.A.'s Finest” was a parody of a cop drama, they would probably believe you.

It is as if the creators, writers and producers of this show cracked open the Big Book of cop-show (and cop movie) clichés and made sure they hit all of them.

“L.A.'s Finest” is the new cop show you have seen being promoted incessantly for the last few weeks if you happen to be a household whose cable service is provided by Spectrum (formerly Time Warner Cable).

This is the show in which two rough-and-ready female detectives -- played by Gabrielle Union and Jessica Alba -- are seen in a promo spot flamboyantly collaring a pair of armed perps in a convenience store.

The promo is ridiculous, and so is the show. They both play as if they were written by those guys who wrote the Mad magazine parodies of my youth.

Gabrielle and Jessica play Syd and Nancy, respectively -- names that may have been chosen, for no apparent reason, for their similarity to Sid Vicious of the Sex Pistols and his girlfriend Nancy Spungen, whose tragic story was told in the 1986 film “Sid and Nancy.”

She died of a knife wound in the Chelsea Hotel in New York in 1978 after he probably stabbed her. Then he died a year later of a heroin overdose.

These two LAPD detective partners have a reputation for throwing out the rule book and doing things their way -- a device that only works in TV shows and movies, but never in the real world of urban policing. It should go without saying, but they have nothing in common with Sid Vicious and Nancy Spungen.

While breaking the rules and maintaining a stellar arrest record, Syd and Nancy never stop blabbing about mundane subjects. Their dialogues are pointless, unrealistic and implausible.

Where have you seen this kind of LAPD buddy stuff before? Well, in a hundred movies and TV shows probably -- although the most relevant example here is the two “Bad Boys” movies made in 1995 and 2003 with Martin Lawrence and Will Smith.

This TV show is connected to the “Bad Boys” movies via Jerry Bruckheimer, a producer of those movies and also numerous cop shows on network TV such as the “CSI” series on CBS.

In fact, “L.A.'s Finest” plays like a show that may have been developed for a conventional network such as CBS, for example, but then might not have been seen as good enough to be picked up.

As it happens, this show is the first entry in a new venture for Spectrum cable called Spectrum Originals On Demand. In our on-screen listings here in New York, this new service goes by the acronym of “SOOD.”

The show, if you can find it on your local Spectrum system, will start streaming with its first three episodes on Monday, May 13. Searching for it may be difficult for some. Our on-screen search feature does not allow us to search this title because there is no provision for periods between “L” and “A” or for the apostrophe in “L.A.'s.” Thus, there is no way for this primitive system to search for the title.

You would think that an operator of cable systems would know this, and therefore direct the producers of its first original series to devise a title that is searchable. Alas.

Not that anybody will miss much if they somehow omit “L.A.’s Finest” from their TV-viewing agenda. In a world that is full of content -- some even good -- from which to choose and spend hours every day watching on screens both large and small, this show simply cannot compete.