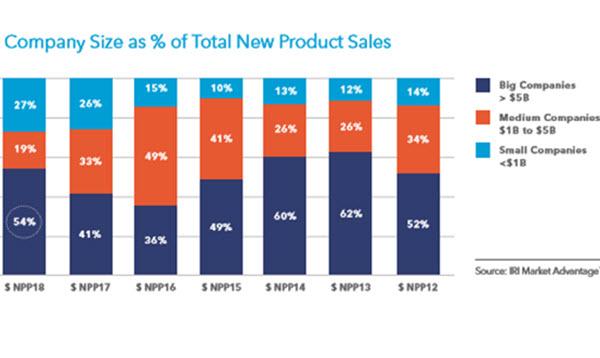 Not long ago, CPG giants dominated product launches in pretty much all respects, along with sales of existing products.

Shifting consumer behavior started changing those dynamics at least a decade ago, giving smaller, nimbler companies able to respond to the demands for healthier, simpler products a David-versus-Goliath edge.

Now, it seems that advances in insights and targeting driven in large part by artificial intelligence (AI) and machine learning (ML) capabilities — combined with new determination to leverage these even among big companies that have been floundering for years — are changing the dynamics again.

For years, a rapidly increasing number of successful CPG launches have been coming from smaller companies.

In fact, for the first time in the 23 years that IRI has been producing its New Product Pacesetters report, the just-released 2018 version shows that more than half (51%) of the most successful product launches in the past year came from what IRI defines as “small” companies — ones with under $1 billion in sales.

Medium-size companies ($1 billion to $5 billion in revenues) generated 27% of launches last year — a drop from 35% just five years ago.

Is it possible that small companies’ long run of significant annual gains in share of launches reached its apex last year? Might their advantages be offset going forward by awakened large companies’ intensified investments in technology and talent focused on consumer-driven launches and acquisitions of successful CPG startups?

As consumers have learned to demand more tailored, differentiated products, new-product hits of the scale possible in the mass culture have become tougher to achieve.

Not surprising, then, that average first-year launch sales have also declined — from about $43 million for food/beverage and $35 million for non-foods in 2012, to under $25 million for each segment in 2018.

Looking at performance by company size, small companies accounted for 27% of Pacesetter sales last year — up from just 12% in 2013.

Mid-size companies’ launch sales — like their launch numbers — have been downtrending. These firms accounted for 19% of total Pacesetter sales last year, down from 26% in 2013.

Large companies generated 54% of 2018 Pacesetter launch revenues. Not a very impressive level, really, when you consider the advantages that enabled them to be at 62% just five years ago. (In total, about $20 billion in sales have shifted away from large and medium to smaller and private label manufacturers since 2013, according to IRI and Boston Consulting Group data.)

On the other hand, 54% is a big improvement over large companies’ surprisingly low 36% share of launch dollars in 2016.

Pieced together, these stats point to several key developments, all driven in large part by growing use of more sophisticated insights and targeting.

Takeaway #1:  Big CPG companies are learning to act like (as well as acquire) smaller ones.

“The decline in average Pacesetter dollar sales isn’t correlated to company size,” the IRI report points out. “Rather, it’s a reflection of increasingly targeted product development and marketing — and acknowledgement of changing demographics of the United States and the ways consumers learn about and engage with brands and companies. Mass market is declining, but smartly targeted markets are growing. Winning companies grow by staying true to their mission and growing dollar sales along with their increasing understanding of consumer wants and behaviors, capturing adjacent white space or acquiring companies that have already demonstrated strength in an emerging area.”

Rather than “trying to be all things to all consumers, companies big and small are succeeding by understanding evolving consumer behavior and investing in innovation and new business practices to deliver the right products efficiently to receptive audiences,” the authors add.

Or, as CEO Andrew Appel put it during IRI’s 2019 Growth Summit, the CPG industry has moved from “the big eating the small, to the fast eating the slow.”

Big CPG marketers are starting to act on the reality that using today’s data and insight-processing capabilities to gauge the true size of a product’s potential buyer base, rather than making assumptions off of previous launches, is key to becoming more agile.

“Starting with the right forecast is one way the big can become the fast,” observes IRI.

The analysts stress that several moderately sized “smart launches” add up: PepsiCo and General Mills each had seven such launches last year, which generated combined sales of $246 million and $177 million, respectively.

Deeper and unexpected insights can also be key in helping to produce blockbusters akin to the days of mass marketing.

And while extensions of huge brands aren’t dominating overall Pacesetters lists as they used to (in 2016, 40% of the leading food and beverage launches and 25% of the non-food launch brands were entirely new to the CPG marketplace, versus nine out of 10 Pacesetters in 2012 being brand extensions), they did dominate 2018’s top performers.

Despite the pattern of decline in overall first-year launch dollars, total CPG sales (per IRI multi-outlet channels data) have continued to grow, albeit at a modest pace. They rose by 1.2% in both 2016 and 2017, and growth accelerated to 1.7% last year.

“While total Pacesetter dollar contributions are down, the upside of [more] strategic launches is the momentum that many brands maintain into year two and beyond,” sums up IRI. “Seventy percent of 2017 Top 10 New Product food Pacesetters grew or maintained sales in year two.”

The consumer insights being gained through AI and ML are helping CPGs and retailers produce “a new wave of products that capture shoppers’ initial interest and maintain that interest over the longer term.”

Next possible frontier? Might more CPGs, regardless of size, start getting serious about launching insights-driven, differentiated products for the many segments and needs within the massive boomer population? Perhaps a worthy focus for an upcoming column.