One Episode Left As 'Game Of Thrones' Nears The End 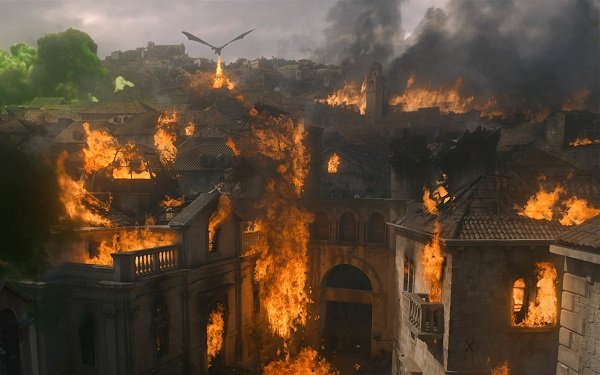 Ho-hum -- another week, another spectacle of Armageddon and mass death on “Game of Thrones.”

It was the fifth and penultimate episode of this final eighth season of “GOT” seen this past Sunday on HBO. And for reasons not entirely comprehensible, the blonde and dimple-cheeked dragon queen Daenerys Targaryen (Emilia Clarke) went on a fiery and destructive rampage that laid waste to most (if not all) of the walled city of King's Landing.

I realize Daenerys was angry and seemed to believe that the best victory in her war with Cersei (Lena Headey) was total victory, even with heavy civilian casualties. But suddenly, she seemed to have turned into a monster out of all reasonable proportion.

And so, as seen in the photo above, Daenerys rode her one remaining dragon on a deadly fire-breathing “victory” lap in which she indiscriminately burned scores of fleeing civilians and enemy soldiers (and probably some of her own) as she systematically scorched the city's medieval streets and alleys that were packed with panicked people.

Scene after scene showed people in flames running and screaming as they were burned alive. Scores of others were bludgeoned, stabbed, beheaded and fatally sliced open.

The episode ran for about an hour and 18 minutes. It could have been shorter, but the show's producers seemed to believe that the long sequences of violence and bloodletting were necessary -- a belief that is debatable.

The point could have been made without a great deal of it. As it was, the long sequences of violent murder seemed like overkill -- over-long, unnecessary and bordering on fetishistic.

On the other hand, much of the action sequences represented bravura filmmaking -- maintaining a standard of cinematic excellence that we have come to expect from “Game of Thrones.” While it may have been exhausting to watch, at the same time, it was entirely exciting.

In the aftermath, the cameras lingered on the burned and mutilated corpses. In one scene, Arya Stark (Maisie Williams) -- herself barely surviving the airborne burning -- gazed upon the blackened, almost formless body of a mother clutching her burned child.

It was like an image from Pompeii, Hiroshima, Tokyo, Dresden or a couple of dozen other places in the aftermath of a catastrophe -- be it a volcano or total war. The long burning sequence could be seen as a World War II allegory, since that is the nearest real-life event we have to this fictional “Game of Thrones” TV show.

Certainly, none of the carnage was even necessary, as victory was already well in hand. All Daenerys really had to do to satisfy her need for vengeance for the deaths of her friend Missandei and one of her dragons a week earlier was to turn her dragon’s fire-breathing snout toward the citadel where Cersei stood watching the defeat of her army and navy.

This would have spared the city and its innocent residents the burning they did not deserve.

All that is left now of “Game of Thrones” is the finale this weekend. There is still much to be resolved and mopped up -- both literally and figuratively.