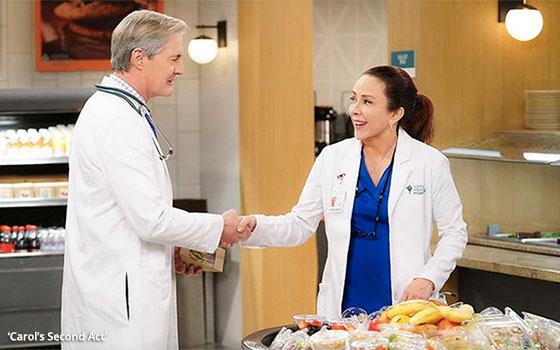 CBS announced five new shows will be added to its prime-time lineup for the new fall 2019-2020 prime-time TV season -- perhaps the most aggressive change of any of the major broadcast networks starting the new broadcast year.

Kelly Kahl, president of CBS Entertainment, called the schedule “stable but not sleepy, aggressive but not reckless.”

CBS has been perhaps the most stable network in recent years when it comes to its viewership -- as well as the current season.  It is earning a season-to-date Nielsen 1.6 rating/7 share among 18-49 viewers through May 5 -- virtually identical to the 1.6/6 number through the same time period it had a year ago.

Total viewers for CBS are at 9.02 million, also virtually even from 8.98 million a year ago -- and trending to give the network the top spot in prime time among all broadcast networks for the 11th straight season.

Nielsen data here is live program-plus-seven days of time-shifted viewing, plus live program and same-day viewing for the most recent weeks.

CBS also says it reached 239 million viewers this season across all dayparts, beating its closest competitor (NBC) by 9.4 million viewers, per Nielsen NPower, where viewers watch at least six minutes.

On Monday at 8:30 p.m. new comedy, “Bob ♥ Abishola” is about a middle-aged compression sock businessman (Billy Gardell) from Detroit who unexpectedly falls for his cardiac nurse, a Nigerian immigrant, (Folake Olowofoyeku). Drama “All Rise” at 9 p.m that night, follows the difficult, chaotic lives of those working in a Los Angeles courthouse.

Thursday night will see a new comedy, “The Unicorn,” about a group of best friends and family who help a man adjust to a new life following the loss of his wife. It goes at 8:30 p.m.

Also that night, “Carol’s Second Act” stars Patricia Heaton at 9:30 p.m. about a woman who pursues a career as a doctor -- after a divorce and raising her children. Then at 10 p.m. comes the drama “Evil,” a psychological mystery that looks at the origins of evil from science and religion points of view.

Other midseason shows: “Tommy,” a drama starring Edie Falco as a former high-ranking NYPD officer who becomes the first female Chief of Police for Los Angeles; “FBI: Most Wanted,” a spinoff from the Dick Wolf “FBI” series, looks at on the Fugitive Task Force, which tracks criminals on the bureau’s most-wanted list.

“Broke” is a comedy with Pauley Perrette, about a single suburban mother who takes in her estranged sister, formerly wealthy husband, and his loyal assistant/driver/friend after the couple’s money dries up.