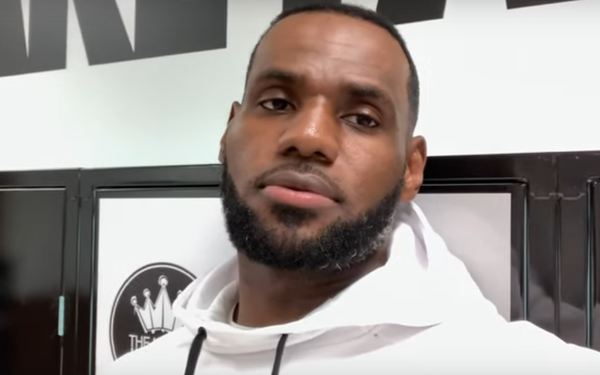 LeBron James and Walmart are teaming up for a cause challenge almost as big as King James: By purchasing any of his favorite food items at Walmart, people can help the charity Feeding America serves its one billionth meal.

The foods, curated by James, aren’t fancy. Items include the ones the basketball legend most relied on growing up in Akron, Ohio, like cold cereal, rice, pasta, peanut butter and jelly and iced tea.

The partnership is intended to raise awareness of hunger and food insecurity, with 41 million Americans -- 13 million of them children -- who struggle with keeping nutrition basics on the table.

Each time someone makes a purchase from the collection, it generates a meal donation from Walmart to Feeding America. As part of its ongoing “Fight Hunger, Spark Change” initiative, now entering its sixth year, the retailer has helped Feeding America provide 750 million meals. It hopes this collection will push that past the 1 billion mark.

The collaboration also includes Walmart stocking the pantry in The I Promise School James opened in Akron this year, a public school designed to help some of Akron’s at-risk kids. The school pantry is open 24/7, making sure families always have access to food and toiletries.

Separately, the Bentonville, Ark.-based retailer released its financial report for the first quarter. While sales gained, notching a healthy 3.4% comparable store sales jump in the U.S. and a 37% leap in ecommerce, the total revenue of $129 billion, a 1% increase, is somewhat less than Wall Street observers had been expecting.

Operating income dipped 4.1% to $4.9 billion, down from $5.1 billion in the same period a year ago. Those results, which included a hit from the acquisition of Flipkart, are stronger than expected.

“Walmart has kicked off its new fiscal year with a strong set of numbers that demonstrate it is maintaining its pace of growth even as it laps tougher comparatives and as the consumer economy tightens,” writes Neil Saunders, managing director of GlobalData Retail, in his note on the results.

“The U.S. operation remains the star of the show… driven by higher customer numbers in stores and online. We believe that some of this is down to the fact shoppers are now becoming more price-sensitive, which plays into one of Walmart’s core strengths,” adds Saunders.

Earlier this week, Walmart shook up the ecommerce world by launching free NextDay delivery, with plans to reach 75% of U.S. population this year, and Saunders says it’s clear that Walmart is intent on sharpening its digital performance.

“We think Walmart is fully committed to building a competitive edge with ecommerce, especially via delivery and collection services. While this could put pressure on margins in the short-term, we believe that Walmart’s logistics capability and its use of stores as points of distribution give it a major advantage over other players in the market, particularly Amazon.”