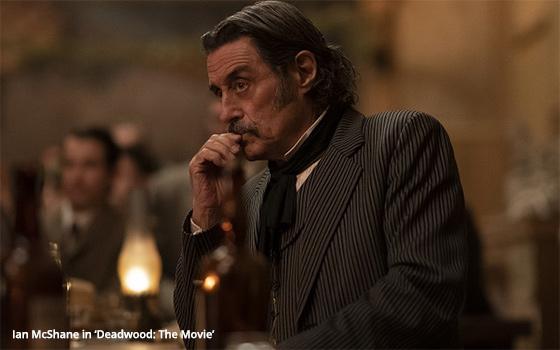 Not to be a quibbler (although we critics cannot generally help it), but the makers of HBO’s upcoming “Deadwood” revival really should have resisted the temptation to tack “The Movie” onto the title.

This long-awaited continuation of the storied Western series from long ago is formally titled “Deadwood: The Movie.” It is due to premiere on HBO on May 31.

Everyone realizes it is a “movie.” It is just under two hours in length, and it is a stand-alone episode, as far as we know. In any case, no other “Deadwood” movies seem to be planned.

Therefore, tacking “The Movie” onto this title revives a pet peeve the TV Blog has long held concerning the titles of many Broadway shows that are given the added qualifier of “The Musical.” In almost every case, their categorization as musicals is obvious from the get-go. I have never understood why they feel the need to package these shows -- such as “Frozen,” for example -- as “The Musical.”

Surely, something cleverer can be devised than these identifiers, as if we would otherwise confuse this “Deadwood” continuation movie as “Deadwood: The Quiz Show,” or even “Deadwood: The Musical.”

It would be accurate, although none too creative, to call this made-for-HBO movie “Deadwood: The Continuation -- After Nearly 13 Years! [exclamation point optional].”

It is in this respect that this new chapter in the “Deadwood” saga distinguishes itself as unique. The saga of the show (as opposed to the Old West saga within the show) is that it ran for three seasons until one day in 2006, when HBO decided to pull the plug and not finance a fourth.

This was puzzling and disappointing to many because this pungent and profane series about the Old West seemed to be gaining in both critical acclaim and popularity. The timing of HBO's decision was such that the show’s production team -- led by David Milch -- had no opportunity to create a proper episode that would serve as a series finale.

In the aftermath, as the anger of at least some viewers made itself heard on social media (including various self-styled efforts aimed at boycotting HBO or igniting a mass subscription exodus), HBO then asserted that the show would have a chance to ride off into the sunset with two movie-length episodes that would air as soon as the following year.

The widespread skepticism that greeted this news was confirmed as the months and years went by and no such movies materialized. And now, suddenly it’s happening all these years later in 2019.

If it's a great movie, look for the headline on the review here to be something like: “Better late than never” or “What took you so long?” One thing we already know about the movie is that almost the entire original cast will be back. Unfortunately, one notable cast member will not: Powers Boothe, who died in 2017. (I just read on Google that he was buried in a burial facility in Texas called Deadwood Cemetery.)

In the years since the original “Deadwood” established itself as one of the standout TV series of the late, great television golden age of the 2000s, HBO has certainly not experienced a mass exodus of subscribers. On the contrary, HBO’s popularity only grew, based most recently on the global phenomenon of “Game of Thrones,” which concluded Sunday night.

In a way, this is why the title “Deadwood: The Movie” is so troubling. It is as if the packagers of this long-awaited event gave it short shrift, and could not be bothered to title it with something more compelling -- perhaps something with the words “Last Stand” or “Showdown” or “Last Round-up.”

Or perhaps this title, reflecting this show's most conspicuous feature -- its language: “Deadwood: [expletive deleted].”