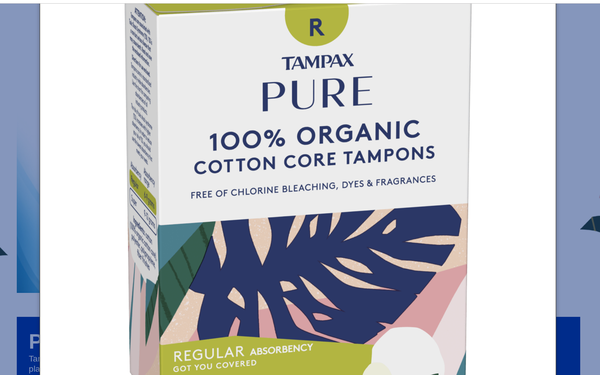 Procter & Gamble is the latest to go to market with an organic tampon and pad. The CPG giant announced the launch of Tampax Pure tampons and Always Pure pads, each ”free of dyes, fragrances, and chlorine bleaching.”

The Tampax version has a  “100% organic”  cotton core. Always Pure pads are made with a top layer made from “sustainably sourced cotton,” according to the company.

With the new Tampax Pure on the market, the brand will discontinue its similarly named Pure & Clean, which has a "100% cotton" core.

Organics are garnering attention from mass marketers, and the feminine care market is no exception. Stratistics Market Research says the global organic and natural tampon market, worth $595.5 million in 2017, will more than double to $1.3 billion by 2026.  The entire tampon market will generate over $6 billion by that year, according to various estimates.

Tampax and Always are the largest brands in the feminine hygiene market, and Tampax is the “original” tampon, introduced in 1931 and now commanding a 55% global share, according to Adbrands.net. So as these brands enter the organic market, they're bound to cause a stir.

P&G seems to suggest consumers are dissatisfied with the organic options already out there. “In speaking with thousands of tampon users in the last several years, it was clear that there was still a big unmet need in the natural menstrual category: an option that worked well,” says Amy Krajewski, section head of global Tampax research & development, in a statement.

A spokeswoman later clarified that point. “Through consumer research, we saw that people are compromising on comfort and product performance for period protection that has the simple ingredients they crave,” she said. And the organic version also has the leak protection features that other Tampax varieties have.

Still, there is some consensus that organic tampons and pads aren't necessarily healthier or safer. ”For the majority of people [conventional tampons] are fine, and have been used for years and years without issue," gynecologist Dr. Alyssa Dweck, author of " The Complete A to Z for your V," told INSIDER.

“If you’re springing for organic-cotton tampons because you’re worried about exposure to harmful ingredients, that isn’t necessary,” according to a long post published by The New York Times' consumer products site Wirecutter. Further,  “there’s no evidence that non-organic tampons are any worse for you than organic ones.”

Tampax and Always will donate a pad or tampon per purchase of specially marked packages, part of P&G’s mission to end “period poverty”” in poorer communities, where lack of menstruation products keeps some young women away from school That’s part of a  program announced last year, with the company working in conjunction with Feeding America.