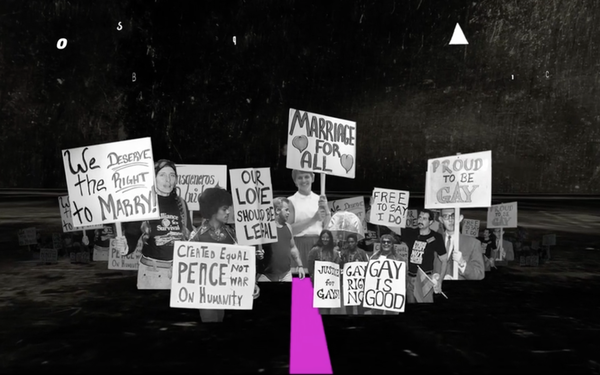 The Los Angeles LGBT Center is celebrating its 50th anniversary with the release of a new logo and a video.

The redesign comes just in time for national Pride month in June. The logo was created using images from multiple protest signs to create a singular symbol. A video, narrated by actress Patricia Arquette, details the creative process and shows the historic protest signs.

Both the logo and the video were created by RPA, which has been working with the center on a pro bono basis for two years, says Jason Sperling, RPA senior vice president, chief, creative development.

“Our goal with this work and with our relationship is to help give the community a voice and create the kind of work that helps the LGBT Center stand apart,” Sperling tells Marketing Daily. “Given that this was a celebration of their 50th year in Los Angeles, it felt like an opportunity to celebrate the people that fought so hard, for so long, for necessary change.”

Raconteur, a consultancy focused on a creative storytelling approach to marketing, was also involved with the logo development.

The logo aims to pay tribute to the movement’s past and convey the momentum that’s being carried into the future by using 292 images from collections at ONE National Gay & Lesbian Archives at the USC Libraries.

Images included those from Chuck Stallard, a photographer whose largest body of work covers the war against HIV/AIDS as seen from the battlefronts of street demonstrations; and Pat Rocco, an activist who documented the LGBTQ rights movement in film and photographs. The images were taken from protests from the past 50 years around the U.S., mainly in Los Angeles.

The "Forward for 50" logo directly speaks to the center’s 50-year commitment to moving in just one direction -- toward progress, by honoring the decades of struggle that have paved the way to freedoms and acceptance, says Kelly Freter, director of marketing and communications at the center, which claims to be the largest LGBT organization in the world.

The font will be available for download on the center’s website. Additionally, stencils created out of the font easily enable people to create present-day signage of their own.

The LGBT Center's Anita May Rosenstein Campus, completed in April 2019, provides health and recreational programs and services as well as affordable housing for seniors and homeless youth. The mixed-use development includes a Senior Services Center for residents and other senior clients, and a Youth Academy that focuses on youth empowerment through education and employment.

There are an estimated 65,000 LGBT seniors in Los Angeles; by 2030 that number will more than double. The center’s Senior Services program has seen a 450% increase in clients over the past five years.