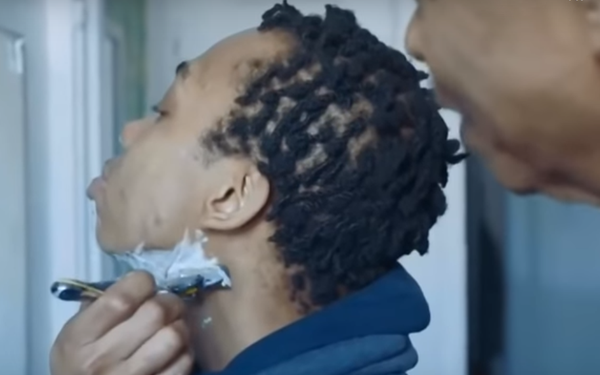 Gillette, which angered some people in January with its ad that showed men being sensitive as a counterpoint to the macho image men’s grooming products often depict, has now debuted a commercial showing a transgender man's first shave.

With the new ad, the right-wing Town Hall website accused Procter & Gamble’s Gillette of continuing to “force its progressive agenda down America's throat.”

On the flip side, the website Pride wrote approvingly, exclaiming that it’s “just freaking great to see inclusivity in mainstream companies and commercials,” and noted that "the new spot arrived just as the spate of Pride parades begin.” (The biggest, in New York, San Francisco and Chicago, don’t occur until the last weekend in June — but other cities often host theirs during the first weeks of June.)

The ad also dropped at about the same time the Trump Administration formally proposed to lift safeguards on transsexual medical patients and make it easier for insurers not to pay for some procedures.

“Why can a razor company understand the need to give my community dignity but not my gov't?” tweeted Ellie Krug, author of "Getting to Ellen: A Memoir about Love, Honesty and Gender Change.”

The ad shows Samson, a Canadian teen, about to try his first shave, with his father offering encouragement and advice. “Now don’t be scared,” he tells the young man as he holds the shaver to his face. “Shaving is about being confident.”

The ad ends with words reading, “Whenever, wherever, however it happens, your first shave is special.” The Gillette slogan, “The best a man can get” follows. (The tagline in the so-called toxic masculinity ad slightly reworked that  slogan into “The best a man can be.”)

Unlike that first ad in January, Gillette didn’t overtly publicize the “First Shave” ad, which a spokesman said will only run on the brand’s Facebook and Instagram pages.

“Gender conversations are happening all around us and we believe brands play a role in influencing culture and have a responsibility to use their voice to champion issues of great relevance to both the brand and our customers,” the spokesman wrote.

“There isn’t a right and wrong time to join an important conversation, as long as you have something of value to contribute to the dialogue. We believe that the optimistic view we have on the potential for men to be at their best is a positive addition to the conversation already underway, and we’re excited to be part of this dialogue going forward.”

The number of U.S. transgender people is quite small — though it’s hard to find an accurate count — but that group is part of the much larger LGBTQ community. Additionally, countless studies now seem to agree that younger consumers want their brands to take a stand on social issues. So while Gillette got hammered by Fox News and others for its earlier ad, there was probably more upside with the consumers it wanted to reach.

The Atlantic called that first ad  “the latest example of exactly what many marketers think brands have to do to communicate with the next generation of shoppers,” noting that brands are stepping into “the leadership void left by ineffective government and cultural leaders.”