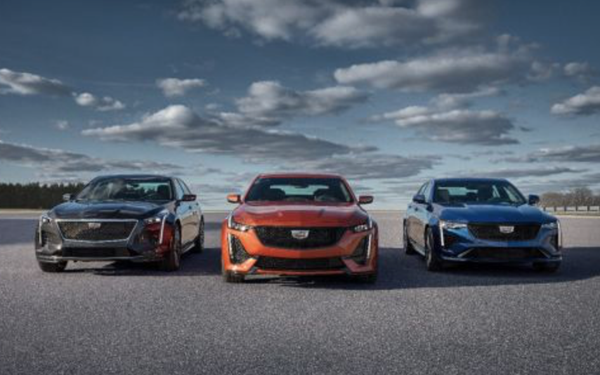 Cadillac, the General Motors luxury car division, is adding two new performance sedans to its lineup. The announcement comes as many automakers are killing sedan models in favor of SUVs and trucks, which they claim consumers are demanding and which also have a higher profit margin.

Following the 2019 CT6-V, they grow the V-Series family with more levels of performance, while preserving the lineage established by the original V-Series lineup introduced in 2004.

The vehicles represent Cadillac’s realigned sedan portfolio, characterized by new proportions, innovative technologies and more appearance and performance choices, according to the automaker.

The CT4-V and CT5-V go on sale early in the 2020 calendar year. Price, as well as details on additional V-Series variants and CT4 luxury, premium luxury and sport models, will be announced at a later date.

“We are inviting even more customers into the V-Series family by adding a new level of elevated performance between our sport models and the ultimate, high-performance track capability that the V-Series has grown to represent,” Vivian states.

Both vehicles feature the latest standard V-Series performance technologies. Each model is available in rear-wheel drive or all-wheel drive.

Cadillac’s exclusive Super Cruise, the first true hands-free driver assistance feature for the freeway, is available on more than 130,000 miles of limited-access freeways in the U.S. and Canada. It will be available on both new V-Series models.

The models are “focused on elevated athleticism and luxurious refinement for customers wanting a dynamic daily drive,” states GM President Mark Reuss. “And this is only the beginning of the V family. Cadillac’s passion for performance shines on a racetrack.”

Reuss made good on that promise over the weekend when Chevrolet Detroit Grand Prix attendees were surprised with a sneak peek at the future of Cadillac’s V-Series when two prototypes took to the track on Saturday. Reuss and Ken Morris, vice president of product, drove the prototypes, which are higher-end racetrack-capable versions of the cars introduced earlier.