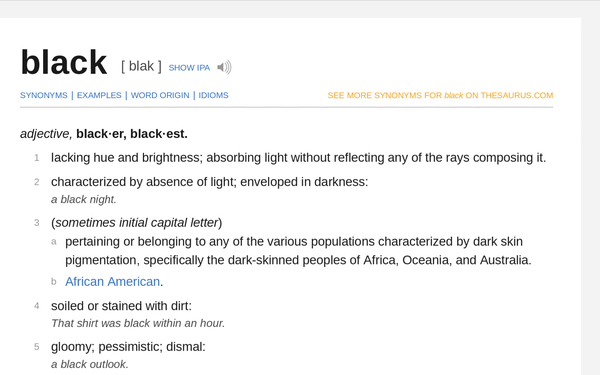 “My Black is Beautiful,” a platform created by Procter & Gamble to support and elevate black culture, on Wednesday asked “all dictionaries to #RedefineBlack.”

And on the same day, Dictionary.com began to honor MBIB’s request.

The online dictionary, which claims 70 million monthly users, announced “we will be capitalizing Black throughout the entry when it is used in reference to people.”

Jane Solomon, a Dictionary.com lexicographer, told Marketing Daily it will also advise users to capitalize “black” when referring to people, improving on an advisory that is already included there.

There’s another seemingly subtle change: “If you look on Dictionary.com today, the adjectival sense of Black that refers to people is the third sense on the page,” the announcement reads.  “Currently this definition sits right above a definition that reads 'soiled or stained with dirt.'“

The statement continues, “While there are no semantic links between these two senses, their proximity on the page can be harmful. It can lead to unconscious associations between this word of identity and a negative term.”

Dictionary.com will make the definition that refers to people second, and another definition (“characterized by the absence of light”) third, giving it separation  from the “soiled” definition, which remains fourth on the list.

Solomon said Procter & Gamble pointed out the potential problem of the proximity between "soiled" and "people." “That’s something we thought we could do without changing the integrity of the definition,” Solomon said. She added, “If what we had up there is hurtful, even to a small number of people,  that’s something we don’t want.”

The “Redefine Black” effort is also supported by DoSomething.org, a tech organization dedicated to getting young people to volunteer in civic affairs.

With its association to Procter & Gamble, “Redefine Black” may make waves the way recent ads from P&G-owned Gillette have stirred some consumers.

"For over a decade, MBIB has inspired change by uplifting Blackness and through honest dialogue about bias,” said Lela Coffey, brand director of multicultural beauty at Procter & Gamble, in a statement.

Solomon said representatives from MBIB and Procter & Gamble attended a May convention of the Dictionary Society of North America and informally chatted with her and other attendees. Those conversations sparked the idea to make changes in the Dictionary.com definition.

She says she told P&G representatives they ought to petition news organizations like the New York Times or the Associated Press to revise their influential style guides as well.

The idea of capitalizing black (and white, too) comes up every so often among journalists, but apparently few gatekeepers are convinced. (MediaPost generally follows the AP Stylebook and doesn’t capitalize “black” in stories.)

Solomon also made clear: “We’re not going to be capitalizing ‘white’ on Dictionary.com.”

And she added, “Often, in English, when white is capitalized it’s going in a white nationalist direction.”