New On Fox: A Reality Series About First Responders 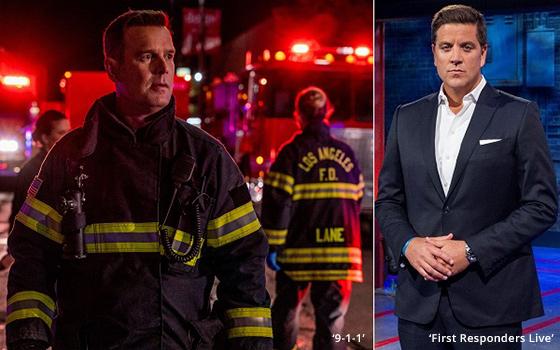 The definitions of simple words often seem malleable in the world of TV.

Take the use of the word “Live” in some TV show titles. In the title for the talk show “Live [with] Kelly and Ryan,” it is used correctly, since this show does indeed air live every day.

In fact, many such shows air live -- such as the network morning shows, for example -- and comparatively few bother to use the word “live” in their titles.

It can be a catchy word, however. In a title such as “First Responders Live,” a new summer reality series premiering Wednesday night on Fox, the word is used to imply immediacy and thereby heighten the potential for anything-can-happen drama.

On the show, real-life first responders such as EMTs and firefighters will be seen in action, but it is not a certainty they will be seen live. The show's “live” designation seems to refer to commentary and hosting to be provided by former network newsman Josh Elliott (seen in the photo above, right).

“Elliott will provide live analysis and commentary, with help from a team of experts, as the show follows first-person accounts of the action,” says a press release from Fox.

This would indicate that in addition to Elliott's commentary, plus observations from some sort of panel, perhaps some of the first responders who were involved in the action will also provide descriptions of what happened.

This doesn't mean the incidents will be live, however, even if this format seems to be -- ahem -- “borrowed” from the A&E show called “Live PD” in which police activities from a handful of smaller cities are shown live as they happen. The A&E show also has an in-studio panel and a host/anchor, Dan Abrams.

Fox's version of this scenario is from the king of prime-time cop and court shows, producer Dick Wolf, although most of his output over the years has been of the scripted variety. The “Law & Order” shows are the best-known of his series, but in recent years, he has been producing a series of scripted shows about cops and firefighters in Chicago.

“First Responders Live” seems to be an attempt at making a “real-life” version of those shows. Fox may also feel the show is compatible with “9-1-1,” the network's scripted series about first responders in Los Angeles starring Peter Krause (pictured above left).

The risk, however -- whenever a broadcast network experiments with this type of reality television -- is that the network will be seen as lowering its standards to the level of the networks on basic cable that traffic almost exclusively in these kinds of low-rent shows.

As mentioned more than once in these TV Blogs, basic cable in recent years has evolved into TV's low-rent district, a neighborhood that Fox or any of the other broadcast networks should avoid visiting.