If Dynamite Is Back in WB 'Toons, Can Falling Anvils Be Far Behind? 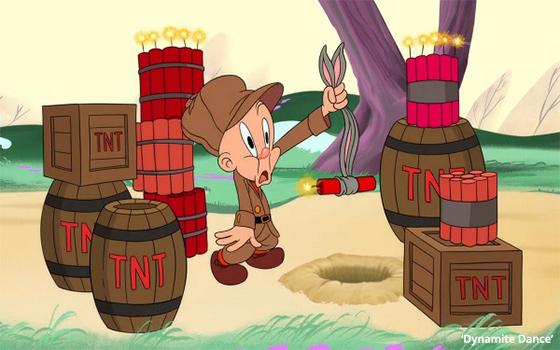 The violence is back, complete with an escalating supply of dynamite exploding in Elmer Fudd's face.

But instead of decrying this senseless and irresponsible use of deadly explosives, the return of Bugs Bunny along with the mayhem that made him famous is something I feel strangely like celebrating.

Why? Let's see if I can find an answer. It goes back to the increasingly ancient childhoods of an aging generation raised on cartoons whose creators apparently knew no restraint on the violence they depicted.

It was cartoon violence, to be sure, but nevertheless, there came a time in the culture when showing cartoons to children in which a hunter -- Elmer Fudd -- blasted a duck (Daffy Duck) point-blank in the face with a shotgun came to be considered inappropriate.

The same went for all the other scenes of violence and the instruments of destruction used therein. Among the most popular were lit sticks of dynamite that would suddenly appear out of nowhere, black cannonball-shaped bombs with long fuses, blacksmith-shop anvils suddenly falling from the sky and a whole host of destructive products made by a single company, Acme.

These devices and their injurious consequences formed the basis for comedy cartoons produced by Warner Bros. before the television era that ended up entertaining a generation of children weaned on television in the 1960s and at least part of the ’70s.

Well, time marched on, and here we are in 2019, and the newly constituted WarnerMedia company -- formed after the takeover of the Turner television networks by AT&T -- is reviving the Looney Tunes brand. And they are doing it explosively.

The screen grab above is from “Dynamite Dance,” one of a new series of Looney Tunes Cartoons that had a premiere screening at a film festival in France this week. The photo above shows Elmer Fudd surrounded by high explosives in this cartoon that is a veritable celebration of dynamite-based violence set to music. You can watch it here.

While the sight of anyone, even a cartoon character, getting repeatedly blasted by an ever-escalating array of explosives might not by its nature sound entertaining, this cartoon is nevertheless wholly entertaining.

It is rendered in the same breakneck style we remember -- and revere -- about the old Warner Bros. Looney Tunes. Watching this cartoon -- running only around 90 seconds -- is an exhilarating experience. I think I watched it 10 times.

One of the things that has changed since the old WB cartoons were seen in childrens' time slots on TV (such as Saturday mornings for years) is that there are now platforms for this kind of content that are not aimed at children.

These cartoons will eventually be seen on a variety of WarnerMedia platforms, including -- most likely -- Adult Swim, where they will fit right in.