Dems On Display, Night 1: Who Stood Out On Crowded Stage? 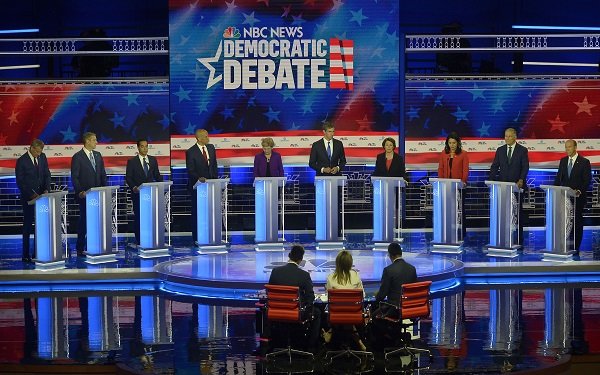 The usual angle to take in these morning-after commentaries about televised political debates is to try to identify who won.

But singling out who stood out in an unwieldy field of 10 Democrats Wednesday night is a tall order. Even at two hours in length, it seemed at times that certain candidates on stage inside Miami’s Arsht Center for the Performing Arts received less airtime than others.

Perhaps it was due to some candidates’ positions closer to the center of the 10-person lineup of podiums (or “podia,” as Brian Williams referred to them during MSNBC's pre-show), but it did seem as if some -- such as Elizabeth Warren and Cory Booker, for example -- received more attention from NBC’s questioners than some of the other lesser-known candidates.

One might even go out on a limb to suggest that Warren came out of Wednesday night’s debate looking and sounding the strongest out of all 10 debaters. This is not exactly news, however, since she was considered the frontrunner -- i.e., the best-known “brand” -- among this group of 10 going into the debate.

Suffice it to say that no other candidate on stage Wednesday night succeeded in flummoxing or otherwise toppling her. For better or worse, despite the time limitations on answers that were necessary to accommodate this crowd of 10, for most of them this two-hour, live debate in prime-time represented the best national media exposure they have yet received.

For a skeptical viewer watching at home this two-hour “Democrat Show” had plenty of eye-rolling moments. Three candidates -- Booker, Beto O’Rourke and Julian Castro -- all spoke Spanish at various points, which may have been because this debate was airing live on NBCUniversal-owned Telemundo (and also NBC and MSNBC).

These demonstrations in foreign-language fluency played like showing off. I read recently that Bill De Blasio speaks fluent Italian, but he never tried it out in Wednesday's debate. Perhaps in Thursday night's debate, Pete Buttigieg will suddenly start speaking Norwegian.

Castro was one of the lesser-knowns who scored big exposure points on this national stage. He ignited one of the first clashes of the night when he directly debated O’Rourke on aspects of immigration law and came out the winner.

Other lesser-knowns came across as also-rans. Hawaii Rep. Tulsi Gabbard could not stop talking about her experience in the U.S. military, as if this alone should win everybody's votes. She came across as humorless and charmless.

She even asserted at one point that the U.S. and the world today are living under a greater threat of nuclear annihilation than at any other time in history -- an assertion that many people over the tender age of 38 (her age) might like to debate with her.

Washington Gov. Jay Inslee's remarks on immigration and his state’s record of welcoming immigrants rang hollow because his state is about as far from the southern border of the U.S. as any state could be -- unless he is experiencing Canadians flooding over his state’s northern borderline.

Early in the debate, someone wrote in my notes that “Bill De Blasio actually looks good -- for a Commie!” How'd that get there? Today, if I accomplish anything, I plan on finding that out.

De Blasio, the mayor of New York, did brag at one point, “I run the largest police department in the country.” You half expected him to then claim that his police force could invade Cuba and win, as another famous mayor in another city said long ago. But instead, he complained about racism and brutality in the police force he “runs.”

Someone should advise Cory Booker to stop talking so often about the violence and other problems afflicting the city of Newark. While listening to him complain about Newark's problems during the debate, it suddenly dawned on me: This guy used to be Newark's mayor. If he couldn't fix his own city, why should he be elected president?

And so it went. Through it all, there was a surprising lack of party disunity, given the crowd of 10 hopefuls whose goals, at least in part, were to do each other in. The debate was considerably civil since the “enemy” for all was Donald Trump more than each other.

This televised, live event was also notable for technical glitches concerning live microphones that should have been switched off. At one point, this problem stopped the show as NBC's Chuck Todd had to plead with his own control room to turn off the various mics that were creating so much audible crosstalk that neither he nor the candidates could hear each other.

It is an amazing thing when these things happen. We have had live TV for roughly 75 years and these things are still happening? As Casey Stengel once said of the hapless New York Mets, “Can't anybody here play this game?”

politics, television
1 comment about "Dems On Display, Night 1: Who Stood Out On Crowded Stage?".
Check to receive email when comments are posted.
Next story loading