Dem Debates Would Have Been Better With Fewer Debaters 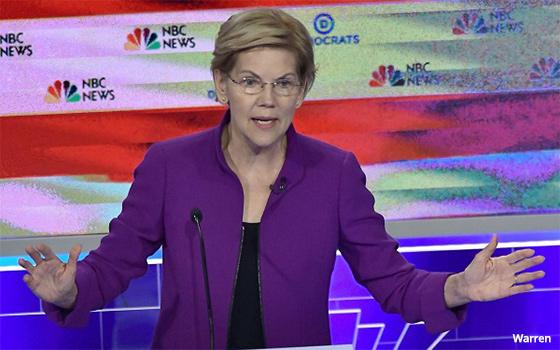 That's a process to hope for where the crowded field of Democratic presidential hopefuls is concerned.

Last week's two-night, prime-time mega-debate featuring 10 qualifying Democratic candidates on each night provided some much-needed live entertainment at a time of year when TV generally dries up like a desert.

But at the same time, the relative value of this debate as a medium for helping the electorate choose who to support in the 2020 presidential campaign was itself debatable.

Thursday night's episode, for example, devolved frequently into absurd shouting matches and cross-yelling. If these incidents demonstrated anything, it is that no one looks good on television interrupting someone else and shouting over them. Such behavior, by its nature, is rude and obnoxious.

One could guess that various media consultants and advisers assessed this debate of 10 participants and then counseled at least some of the candidates to boldly interrupt and interject, even out of turn if need be, in order to attract the cameras and grab as much onscreen time as they could.

From the vantage point of viewers watching at home, the result was a mess, and showed the most grasping and disruptive of the candidates -- such as New York Sen. Kristen Gillibrand, for example -- in a harsh and unfavorable light.

A smaller field of candidates would inevitably help improve this situation, since there might then be enough screen time to go around in a two-hour event. As of Friday, though, as this TV Blog was written, none of the participants in last week's debates had yet decided to throw in the towel.

For now at least, unless someone drops out, we can expect the next debate double-header scheduled for July 30 and 31 from Detroit on CNN, to again field 10 candidates on each evening.

After that, four more debates are scheduled through the end of the year -- September 12 and 13 on ABC and Univision (location undetermined); and in October, November and December, on dates and networks that have yet to be announced.

Six more are scheduled for January through April 2020. Certainly, by next year if not before, this field of contenders should be significantly narrowed down.

From a television standpoint, the 2020 Presidential Elections are going to be a long haul, and they are still more than a year away.

news, politics, television
2 comments about "Dem Debates Would Have Been Better With Fewer Debaters".
Check to receive email when comments are posted.
Read more comments >
Next story loading