What's Red And Blue And, Hopefully, Read All Over? 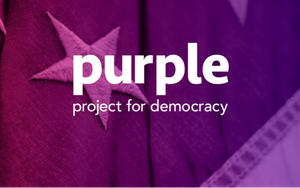 A little more than a year ago, I found myself shocked by a statistic I heard on a radio show that 23% of American Millennials believe democracy is a “bad” or “very bad” way to run a country. The show was public radio station WNYC’s “On The Media,” and today, one of its hosts has come full circle, launching a new publishing and public education platform to promote, well, democracy.

The platform, dubbed the Purple Project for Democracy, is the brainchild of “On The Media” co-host Bob Garfield, who teamed with the Brookings Institution, Brookings Senior Fellow Rebecca Winthrop, Wharton Professor Yoram Wind, and National Conference on Citizenship CEO Sterling Speirn to line up an impressive list of civics and content publishing partners to help inform the American public about the importance of participating in our democracy and the role that media plays in it, both good and bad.

Initial content partners include iCivics, New York Public Radio, streaming platform OVID and The Washington Post, but Garfield says Purple expects to announce others soon. And to illustrate the platform’s non-partisanship, he says he even asked Fox News to participate, conceding, “That was a tough call for me to make.”

Garfield says he’s making lots of tough calls, because Purple’s goal is to put politics aside and put democracy front and center. And if you haven’t already gotten the reason for its name, “purple” is the color you get when you mix red and blue.

Other than being politically neutral, Garfield says Purple’s contributors only need to publish content that helps inform Americans about the history and role of our democracy and why it’s important for them to participate in it.

He says the platform simply is an organizing principle for the partners to come together under that theme and there are no explicit guidelines for how they should publish it.

“Some of it could be like ‘Schoolhouse Rock,’” Garfield explains, citing the ABC public affairs programming series aimed at educating kids about democracy. (Check out the classic “I’m Just A Bill” episode below.)

Other content might get into the weeds about the role that journalism plays in informing Americans about issues related to our democracy.

“How about where a newspaper story comes from,” Garfield explains, adding, “We could show the process by hyper-annotating a news story on a given day, or 30 such stories over 30 days, to show the process. What was included. What was excluded and why. The goal would be to disabuse myths about the role of journalism. People think they know where this stuff comes from, but often they don’t.”

One thing you won’t see in any content carrying the Purple banner is anything published with a politically partisan perspective.

While Purple operates mainly on an honor system, participating in the platform requires goodwill from publishing partners.

It also requires a modicum of financial support from corporate sponsors and individual contributors.

“We have no money at the moment, and all of our partners are pro bono contributors,” Garfield explains, adding, “Our goal is very quickly to get corporate sponsors. It would be a relatively nominal amount of money and I think it is about as brand safe an environment as anything you want to attach your name to. There’s no liability in coming out for democracy. It’s like saying you’re for motherhood.”

While Purple’s method is purposely decentralized in terms of organizing and managing the content that gets published, Garfield says it will help redistribute its partners stories, including via social media.

In terms of KPIs, Garfield said Purple will be tracking public sentiment, including periodic polls. And of course, it will have the ultimate measure of civic involvement: how many voters turn out on Election Day.

“Presumably we’ll get higher voter turnout,” he projects, adding, “because the whole thing is to promote higher civic participation.”

cause-related, politics, radio
4 comments about "What's Red And Blue And, Hopefully, Read All Over?".
Check to receive email when comments are posted.
Read more comments >
Next story loading