Ordering In Is In: Use Of 3rd-Party Food Delivery Apps Grows 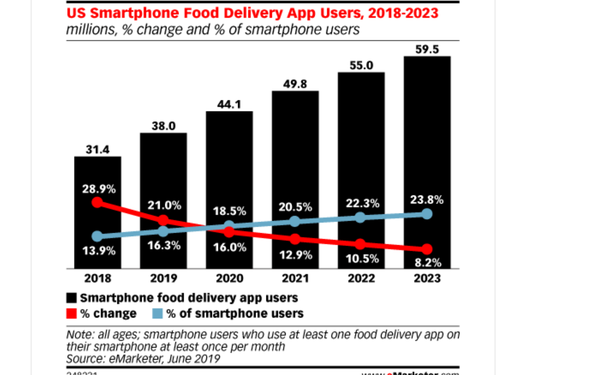 The food business loves a trend -- and, judging by the numbers, there’s hardly anything in that category more trendy these days than food delivery apps.

Food delivery apps are third-party businesses like Uber Eats and Grubhub that consumers use to order food to their door prepared by restaurants. This year, eMarketer says, 38 million Americans will use one of those apps, up 21% from 2018.

Just last week, The NPD Group also weighed in, noting the rapid growth of those third-party apps, but also pointing out that 70% of the food orders come from the restaurant brand’s own app or website.

According to Edison Trends, DoorDash, with a 27.6% share of the third-party apps market, leads the list, followed by Grubhub and Seamless (essentially the same company) with 26.7%, and Uber Eats with 25.2%.

But it’s not all peace and love between restaurants and their delivery companies. Some restaurants complain of being charged high fees by the app companies -- as much as 30%, says the Eater website.

Some restaurants have banded together to file a class-action lawsuit against Grubhub, arguing that the company has counted order inquiries as actual orders, increasing their take. The suit also says Grubhub has charged restaurants for information requests  or complaints made by consumers. Grubhub denies the allegations.