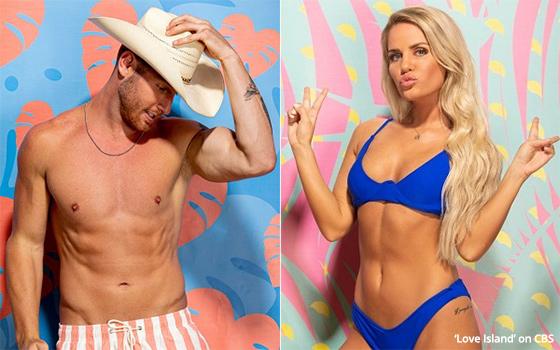 The evidence is a new reality-coupling show called “Love Island” that CBS intends to air every evening for 22 consecutive weeknights at 8 p.m. starting Tuesday (July 9). This daily dose of “Love Island” is scheduled to end on Wednesday, August 7 -- a run of nearly four weeks of weekday evenings.

It is at times like these that I truly appreciate the skill sets that TV publicists must tap in order to promote shows like this one, which is little more than a summer reality “dating” show done up in swimsuits (see photos above of two of the contestants).

On “Love Island,” a group of singles -- both men and women -- are thrown together in a large house on the island of Fiji in the hopes that sparks will ignite into romantic passions. The press materials are a little vague on this, but there is some sort of process by which those singles who are not properly coupled with someone else at various appointed times will be eliminated from the show.

In addition, one of the press releases alluded to an interactive element that will allow viewers at home to have some kind of input into who stays and who goes.

However, except for a few small details and insignificant differences, “Love Island” seems similar, more or less, to a dozen or more such shows that have come and gone in the last 15 years, including “Temptation Island” (which USA Network recently revived), “Bachelor in Paradise,” “Love Cruise,” “Ship Mates” and many others.

And yet, CBS’s promotional materials would have you believe that “Love Island” is a worldwide phenomenon on par with “Avengers: Endgame.”

“Love is coming to America with the U.S. version debut of LOVE ISLAND, the sizzling summer series based on the international smash hit and cultural phenomenon,” reads the first line of a description of this TV show on CBS’s media Web site.

In a press release for the show, Sharon Vuong, senior vice president of alternative programming, is quoted as saying, “As the buzziest reality show in the U.K., LOVE ISLAND has won the hearts of viewers across the pond as well as around the world, creating appointment viewing and fanfare for audiences everywhere. We are thrilled to bring our version of this cultural phenomenon to CBS. This fun, lighthearted series is like watching your favorite romantic comedy five nights a week!”

Let the record show that the TV Blog finds nothing wrong with this promotional approach, having been on the receiving end of so much of it for so many years.

Put your best foot forward, I always say, and if that means positioning “Love Island” as a worldwide cultural phenomenon, then so be it. Besides, proving or disproving this claim of global fascination in “Love Island” might be impossible to do. At any rate, it would clearly take much too much effort for a broiling afternoon in July. So, the claim stands.

In the positioning material quoted above, the comparison is made between each nightly episode of “Love Island” and romantic-comedy movies. The claim is that those who enjoy the latter will love the former.

But like ’em or not, some of our best-known romantic comedies were written by top screenwriters, and produced by our top studios with the participation of top stars -- from Meg Ryan to Kate Hudson. How can “Love Island” and CBS possibly hope to top them?